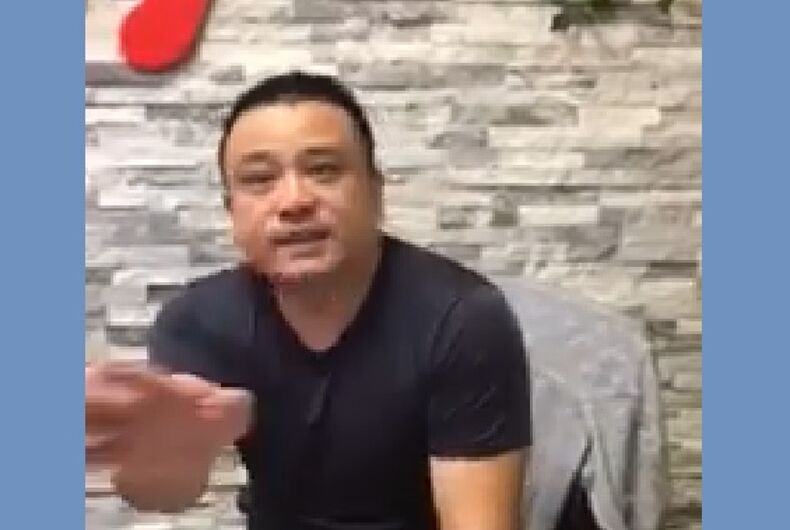 A gay couple in Florida was turned away from a spa after they had already booked and paid because the spa didn’t consider them a real couple.

Michael Levenosa and his boyfriend booked a $109 couple’s massage at the Joy Feet Spa in Naples on Monday.

But when they went to the spa, the manager turned them away because they are a gay couple.

“When we arrived the manager refused to service us because we are two gay men,” Levenosa wrote on Facebook.

He also posted video of the encounter. The manager laughed when Levenosa says they’re a couple.

The manager also denied that this was discrimination against gay people. His argument was that gay people could get a massage there, but they couldn’t access the couple’s rate. He even offered to let them in if they paid the difference.

“He made it clear it had to be a man and a woman,” Levenosa wrote. “Even after we told him we already paid he still denied us the couples massage.”

“Today my humanity has been tested.”

My boyfriend and I decided that we wanted to have a relaxing Monday. So we Prepaid $109 and booked a couples massage at…

On their Facebook page, the Joy Feet Spa said that their couples massage is for any kind of couple.

A later post called the incident a misunderstanding and the owner said that he had never seen a same-sex couple. He implied that what happened was a result of cultural differences.

In a third post, the spa offered Levenosa and his boyfriend a free massage as an apology.

When asked if he would take the spa up on the offer, Levenosa told Yahoo! Lifestyle “Heck no.”

“I can’t go back there, all I’ll be thinking about is how they treated us when we first got there.”

“People need to treat people how they want to be treated. It’s that simple.”

He added that he has not yet received a refund on his original $109.

There is no law banning discrimination against LGBTQ people in Naples, Collier County, or the state of Florida.

Did Tim Gunn meet J. Edgar Hoover while the former FBI director was dressed as a woman?