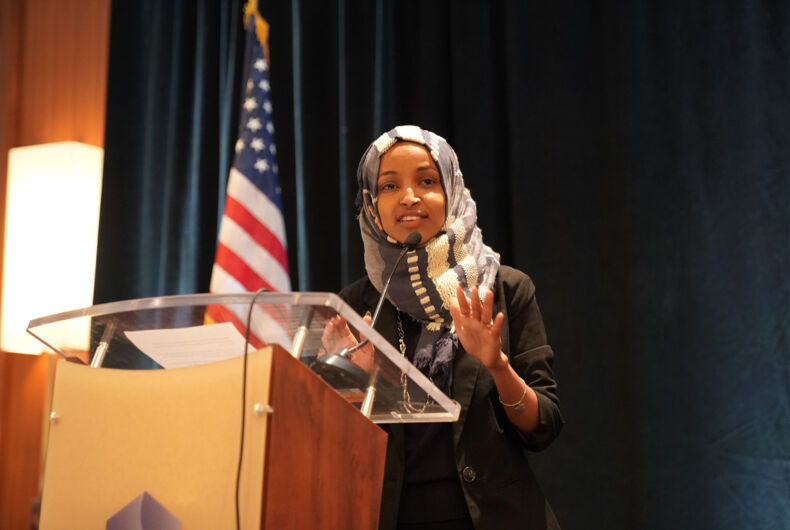 President Trump ripped the Democratic Party and House Democrats in particular for passing a resolution against the many forms of hatred which singled out anti-Semitism.

Controversy has recently swirled around first-term Democratic Representative Ilhan Omar of Minnesota. Back in 2012, she tweeted: “Israel has hypnotized the world. May Allah awaken the people and help them see the evil doings of Israel.”

Last month, she wrote that U.S. support for Israel was “all about the Benjamins baby,” signifying Benjamin Franklin, who appears on the $100 dollar bill.

A few weeks later, she told an audience in D.C., “I want to talk about the political influence in this country that says it is O.K. to push for allegiance to a foreign country.”

Confronted about this latter remark by her Democratic colleague, Nita Lowey, Omar replied, “I should not be expected to have allegiance/pledge support to a foreign country in order to serve my country in Congress or serve on committees.”

Though we all the right to criticize any country including our own, and Omar raises important and critical concerns related to campaign financing, Omar crossed a line into hate speech when she injected age-old, stereotyped Anti-Semitic tropes of Jews being ruled by wealth with no true allegiance to their countries of residence.

A similar trope was lodged against John Fitzgerald Kennedy when he campaigned for the U.S. presidency. Being raised Roman Catholic, critics accused him of holding dual allegiances to the United States and to the Catholic Pope who would dictate American policy.

Democratic House Speaker Nancy Pelosi explained the reasoning behind the recent resolution and her defense of Omar.

She told a crowd of reporters, “I feel confident that her words were not based on any anti-Semitic attitude, but that she didn’t have a full appreciation of how they landed on other people where these words have a history and a cultural impact that might have been unknown to her.”

Pelosi might be correct that Omar “didn’t have a full appreciation of how [her words] landed on other people.” Perhaps she didn’t know the stereotypes and tropes targeting Jews. Maybe Omar didn’t intend to offend.

But we must separate “intent” from “impact.” While someone may claim good intentions, the impact of their actions on others may in fact be prejudicial, offensive or oppressive — effects that the perpetrators must acknowledge and own.

Ignorance is understandable, but it cannot be used as a defense for oppressive language and behaviors. Members of every group and identity must do the homework to better understanding the many stereotypes and forms of oppression surrounding different groups.

Conversely, when anyone “uses” an already marginalized group to advance their own agendas or careers by tokenizing or feigning support, that itself is also an act of oppression. Donald Trump is currently using Jews as a way to accuse the Democratic Party of being “anti-Israel” and “anti-Jewish” by passing the resolution against hate. He himself has also been accused of anti-Semitic politics in the past.

“I thought yesterday’s vote by the House was disgraceful,” Trump said. “I thought that vote was a disgrace, and so does everybody else if you get an honest answer. The Democrats have become an anti-Israel party. They’ve become an anti-Jewish party, and that’s too bad.”

Rather than attacking the vast majority in the House of Representatives who voted across party lines in favor of the resolution, 407 to 23, Trump should criticize the 23 Republicans who didn’t support the measure.