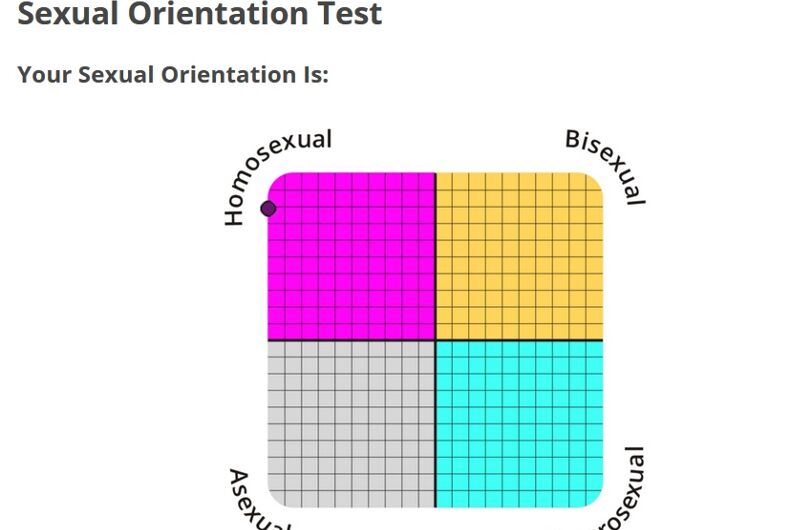 An online test about sexual orientation is going viral.

IDR Labs has a website with various tests you can take to measure traits like political ideology and personality type.

Their Sexual Orientation Test asks you questions about your sexual attraction to men and women and then tallies up your answers to put you somewhere on a grid with four quadrants: homosexual, bisexual, asexual, and heterosexual.

While some people are having fun finding out how gay or bi the test says they are, the variance within quadrants appears to be, in part, a function of how much you like clicking on “very often” as opposed to a lesser degree of often.

Related: More straight men are going gay than ever before

That said, the new test is still just as binary as the old one when it comes to gender identity. In the test, you are either a man or a woman and you are asked questions about your attraction to men and women.

IDR Labs admits as much, but also says that the test was significant because of how it approached bisexuality.

The test effectively engages in rounding, though. Someone who gets less than 50% for their attraction to either the opposite or the same sex but over 50% for the other will be categorized as gay or straight, even though someone like that might identify as bisexual, and it’s hard to see why someone who sometimes fantasizes about both men and women isn’t legitimately bi.

Anyway, since the Sexual Orientation Test just asks questions about sexual attraction, not behavior or identity, it appears pointless outside of its original context.

Are there people out there who can assess their own sexual attraction but don’t know that being, for example, attracted to the opposite sex but not to the same sex is pretty much the definition of heterosexuality?

We knew already but I’m happy with it pic.twitter.com/NZuiQbFBqb

Still, some people are having fun with it.

everyone do this test and then expose yourself in the comments let's expose the straights once and for all https://t.co/evku2gAw0r pic.twitter.com/oE8k5XPQEx

AM I A FUCKING LESBIAN AND DIDN’T KNOW IT????I am 21.4% heterosexual, 85.7% homosexual, which places me in the homosexual quadrant. https://t.co/DRE6fkdggc via @idr_labs