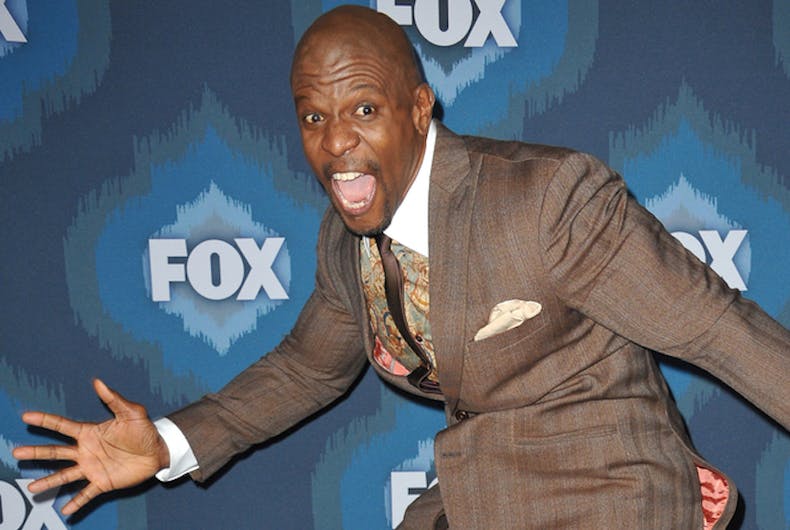 Actor Terry Crews recently repeated right-wing anti-LGBTQ talking points on Twitter by claiming that the children of same-sex parents are “severely malnourished” and that every child needs a mother and father.

His comments came in response to a New York Times opinion piece written by a woman named Derecka Purnell. Her piece was entitled “Why Does Obama Scold Black Boys?”

Purnell’s argument is basically that Obama and others shouldn’t lecture black boys on pulling up their pants and acting right when he and others do nothing to change social policies that keep black communities poor and subject to violence:

Programs like My Brother’s Keeper [and Obama] insist on making better versions of Trayvon Martin, the black victim, instead of asking how to stop creating people like George Zimmerman, the racist vigilante. Rather than encouraging them to dismantle the systems that deepen wealth inequality, Mr. Obama tells black boys to tuck their chains….

In his (recent) Oakland comments, [Obama] criticized absent fathers, even though a 2013 report by the Centers for Disease Control and Prevention found that black fathers were the most involved with their children daily than any other group of fathers.

In response to her article, Crews, who is a Christian, tweeted, “If a successful black man can’t advise the black male youth of the next generation, who will? THE STREET. That’s who.”

He continued, “Another thing that bothers me is that this OP-ED was written by a WOMAN about how how boys should be taught to grow into successful young men. How would she know? MEN NEED TO HOLD OTHER MEN ACCOUNTABLE. I REPEAT: Women can speak with us. Just not FOR US.”

In a tweet since deleted, he added: ‘I’ve reiterated many times that same sex couples and single parents can successfully raise a child. But I believe paternal AND maternal love are like vitamins and minerals to humanity. No matter where you get that paternal and maternal love. MY purpose is to give paternal love.’

Told by another user that ‘love is not gendered. A child will not starve with only one gender loving them,’ Crews replied: ‘But they will be severely malnourished.’

Crews later half-apologized for the now-deleted tweet, writing, “I apologize to anyone who was hurt by my ‘severely malnourished’ tweet. It was in response to someone who said kids wouldn’t ‘starve.’ It was poorly worded so I deleted it.”

He later accused critics of trying to “cancel the concept of a father,” and wrote, “ALL HUMAN BEINGS ARE EQUAL. BUT WE ARE NOT IDENTICAL.”

In his own defense, Crews then posted the following January 2014 interview from the female-led daytime talkshow The View in which he discussed the importance of fathers in young boys’ lives.

During the discussion, he said, “There are some things that only a father can give you.” He then acknowledged critics who said that their mothers raised them well, and then continued:

During the show, Whoopi Goldberg said that despite the seeming nobility of Crews’ statement, his thinking is “taking away from mothers”

During the same talk, Crews said that Sylvester Stallone was his father during the filming of their 2010 action film The Expendables. Crews was 41 years old at the time.

“I’m not discounting [single] mothers, but [a son] will be insecure until he finds [a father figure to provide him a father’s security],” Crews said.

Goldberg conceded, speaking directly to same-sex female couples raising kids that Crews was merely saying that a man’s influence should be incorporated into their son’s lives.

Related: Russell Simmons tried to convince Terry Crews to give the man who groped him ‘a pass’

Back on modern-day Twitter, a commenter called Crews “a misogynist, homophobic *sshole,” and Crews responded, “You apparently thought I was your puppet. But I have a mind of my own, and can see and think very clearly. The ‘phobic’ tag is the most feared public tag next to racist. I don’t fear it because I am neither. Bullies come in all shapes and sizes.”

He then added, “I have another very controversial statement to make, and I will since I’m ‘canceled’ anyway. As a human being there are things you can only get from your mother.”

Right-wing hate groups have long opposed same-sex marriage and adoption with the line, “every child needs a mother and a father.” So it’s easy to understand why Crews’ words have upset some people.

Crews had been praised by LGBTQ people and sexual assault survivors with his recent admission of having been groped by a Hollywood executive and his congressional testimony advocating for better protections against sexual assault.

This black man tricked a neo-Nazi group into making him its leader. Now he’s working to shut it down