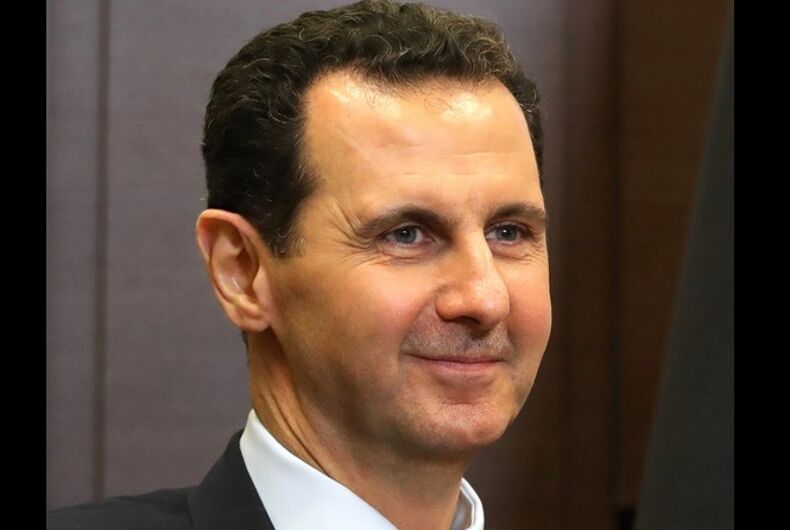 Bashar al Assad has been President of Syria since 2000, winning uncontested elections for years. He has been indicted for war crimes at the International Criminal Court.Photo: Wikipedia

The Syrian government has been using widespread sexual torture to force confessions out of male prisoners and silence them, according to a new report.

A report released this week by the Syrian organization Lawyers and Doctors for Human Rights (LDHR) describes how security forces use humiliation, sexual torture, rape, and forced sterilization on prisoners.

There aren’t any accurate statistics about the prevalence of the abuse, in part because of an unwillingness for victims to talk about what happened to them and also because of how hard survivors are to track down.

LDHR spoke with 138 men. 40% said that they were sexually assaulted in some way, and 90% said they were forced to be naked.

Several said that guards would insert hoses in their anuses and watch their bodies swell up.

They also described how they were packed into cells naked for days, lying alongside others in unhygienic conditions.

Some said that mechanical tools were used to torture them.

“These were moments when you didn’t recognize yourself as a human,” said one man in the report. “As I lay there, it wasn’t that I wanted to die. It was that I wished I’d never existed.”

Over 100,000 detainees remain unaccounted for in Syria since the start of the uprising eight years ago, and tens of thousands of them might already be dead.

The Syrian Network for Human Rights reported that 2,000 people have been detained since this past November.

Three-quarters of the men in the report said that they experienced symptoms like depression, nightmares, and flashbacks for years after being released.

“The patients we see often believe that they cannot recover from that.”

The torture may be linked to suicide as well.

“A man from Douma did not speak to his family for three days upon his return, and then he killed himself. We only learned his full story from cellmates after his death.”