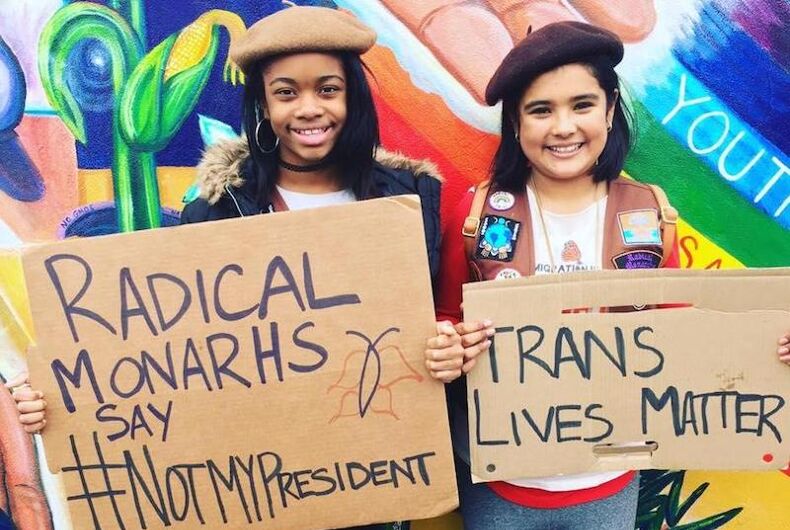 When activist Anayvette Martinez’s fourth grade daughter asked to join the Girl Scouts with her friends, Martinez felt that its mostly white membership wouldn’t center her daughter’s experience as a person of color.

So she and her college friend Marilyn Hollinquest, another queer women of color living near San Francisco, founded The Radical Monarchs, a group dedicated to “creating opportunities for young girls of color to form fierce sisterhood, celebrating their identities and contributing radically to their communities.”

A new documentary, We Are the Radical Monarchs (directed by Linda Goldstein Knowlton), follows its first two troops from early 2015 to June 2018, as they earn merit badges in fields like Radical Pride, Radical Beauty and Black Lives Matters.

Knowlton spoke with LGBTQ Nation at the SXSW 2019 Festivals and Conferences, where her film recently premiered, to offer some insights.

Instead of learning how to sew and sell cookies, The Radical Monarchs discuss female beauty standards in Vogue and Ms. Magazines and learn the local history of the Black Panthers in Oakland.

They lobby local legislators to oppose anti-immigrant policies and march with a trans group in San Francisco’s Pride parade shouting, “Hey hey, ho ho, transphobia has got to go!”

Predictably, it’s enough to make conservative talking heads explode. But as the group’s organizers explain, kids of color are well aware of racial issues by the time they’re five, and anyone who complains about “indoctrination” is willfully ignoring the worldview they’re taught every day in predominantly white media and school textbooks.

Martinez and Hollinquest don’t see their group as exclusive, but rather as including experiences of color for the first time.

The group was first known as the Radical Brownies. But when the Girls Scouts respectfully asked them to stop using the name to avoid brand confusion, its young members helped come up with a new name.

They settled on monarchs as a royal symbol of transformative power and change, and because monarch butterflies have a connection to immigration, migrating annually from South America to North America.

Knowlton saw the group mentioned they first got mainstream press coverage. One picture in The Guardian showed its adorable young members wearing Black Panther-inspired vests and berets, and making the power fist.

“You don’t often [hear about radical girl groups],” Knowlton tells LGBTQ Nation, “and my heart skipped a beat. And I thought, ‘Oh my God, there’s hope for the future.’ And I just had to find out what they were about.”

After she met the founders, the director tells LGBTQ Nation, “I just thought, ‘These women are inspiration, they’re real, they’re human. They have real incredible, busy lives and they are making this happen because they believe in it.’”

“I like being around people who have a vision and just go for it,” Knowlton adds. “They can’t know if they’re going to succeed or not. It’s the striving [that matters].”

Related: Conservatives want you to boycott Girl Scout Cookies because AOC was a girl scout

Soon after their mainstream coverage, the group received over 200 requests from around the U.S. for local chapters. But that sort of expansion requires standardizing and copyrighting their curriculum, training leaders, making the organization profitable enough to commit to full time, and learning what issues most affect the local communities. After all, a top-down, one-size-fits solution won’t best serve girls the best in all places.

The film shows the girls and their leaders collaboratively discussing complex social issues, discovering just how many questions and feelings they share. These activities allow cross-generational empathy in a way that “traditional” activities like sewing and cooking wouldn’t. They also dismiss the notion that “adults know everything,” because they sure as heck don’t.

Knowlton had initially intended only to film for one year. But she got diagnosed with cancer a month after she began shooting, and decided to slow down its completion. She ended up filming for three-and-a-half years.

She snuck two Radical Monarchs into a huge line of adults to ask a question of Rep. Alexandria Ocasio-Cortez during her SXSW keynote speech this year. The girls—who idolize Ocasio-Cortez, Knowlton says—asked what advice she’d give to young women of color looking to enter politics.

Ocasio-Cortez answered, “Stop trying to navigate systems of power and start building your own power. There are so many subconscious forces that make us try to act like somebody else … but when you’re woman of color, there are so many things about you that is non-conforming.”

Viewed one way, the Radical Monarchs are learning how to sew, but instead of constructing a garment, they’re constructing social change, mending a torn society and learning how their individual threads (racial heritage and individual identities) stitch into a more beautiful and stronger whole.

And that whole matters immensely. For even if parents teach their kids to take pride in themselves, it isn’t as potent as having a community of peers and adults uphold, affirm and value you too.