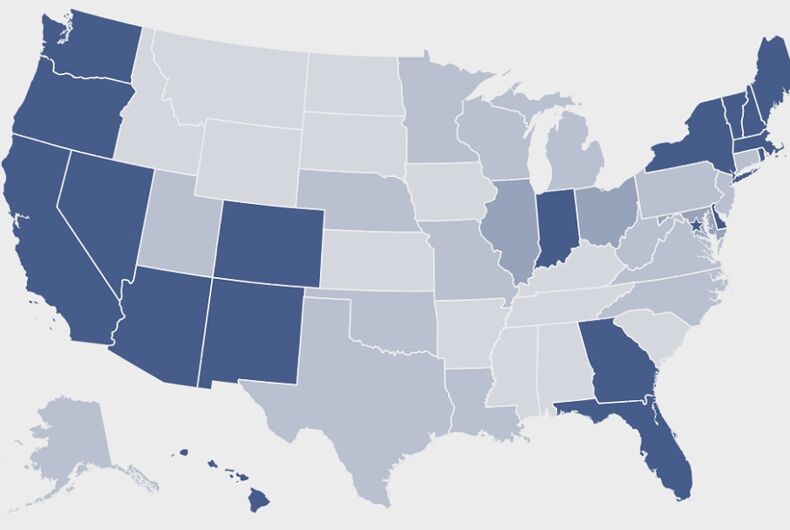 A map of the survey results. Darker blue states have a higher LGBT population.Photo: Williams Institute

4.5% of Americans are LGBTQ, according to survey data released by the Williams Institute.

The survey asks people if they identify as gay, lesbian, bisexual, and/or transgender, and the Williams Institute took the responses from the people who said “yes” and coded them as LGBT.

With that data, they found the percentage of people who identified as LGBT in each state.

Oregon, Nevada, Massachusetts, California, Washington, Vermont, and New York were the states with the largest LGBT populations, all over 5%.

Montana, Idaho, and North Dakota were the lowest, coming in under 3%.

This may be the result of LGBT people moving from less accepting to more accepting areas when they can.

Another explanation is that people in certain areas are more likely to accept their sexuality or gender identity as a result of those states’ cultures.

Or the variance between states could be response bias; that is, people in certain states might be more afraid of coming out, even if it’s to an anonymous person over the phone.

The Williams Institute posted the data on an interactive website where you can look at charts of the entire sample or break out race and sex categories.

The survey data was also broken down by race, sex, and some socio-economic factors.

(For this survey, respondents were asked if they were of “Hispanic, Latino, or Spanish origin” and then asked their race. If they said “yes” to the first question, they were put in the latinx category, and their response to the race question was ignored.)

Women were much more likely to identify as LGBT than men. 3.9% of men and 5.1% of women identified as LGBT, although the lack of a non-binary option may have affected the results.

This held for white, black, Asian, male, and female LGBT people. White LGBT people, for example, were worse off than white straight people.

The survey data for latinx LGBT people was mixed – they were more likely to be food insecure but also more likely to have insurance than straight latinx people.

Educational attainment for LGBT people, though, was never more than a few percentage points away from straight people’s, so education doesn’t explain the economic disparity.

One odd result from the data is that LGBT women skew young much more than LGBT men do.

Instead, LGBT women are much more likely to come from the younger age brackets.

The same was found with LGBT men, but the effect was less pronounced.

While the general skew for LGBT people may be easily explained – younger LGBT people are growing up in a more accepting society than their older counterparts – the difference between LGBT men’s and women’s age distribution would require a more complicated explanation.