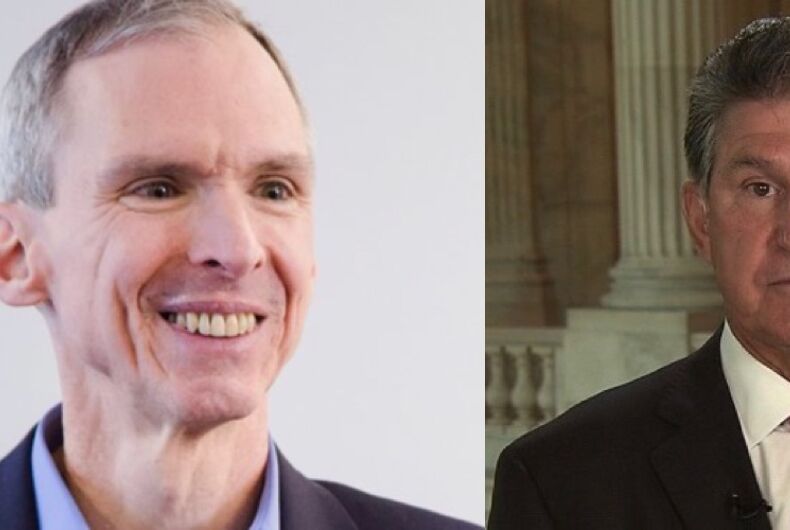 Illinois Congressman Dan Lipinski and West Virginia Senator Joe Manchin are the lone Democrats who won’t sign on to the Equality Act. The proposed law would ban discrimination against LGBTQ people.

Both men are known for their conservative views and Republican-lite political decisions. They’ve both been a pain in the neck for Democratic leaders.

Related: This Republican lawmaker said he would drown his own kids if they’re gay

While many progressive advocacy groups for different issues worked together to recruit and support a primary challenger, he won the first round and cruised to victory in the general election because his Republican opponent was a self-described Nazi. Even fellow Illinois Democratic Congresswoman Jan Schakowsky endorsed his primary opponent.

Manchin isn’t exactly a stalwart supporter of equality either. He refused to sign on to previous bills meant to protect the LGBTQ community. While Democrats came out of the woodwork to celebrate the Supreme Court’s decision to legalize same-sex marriages nationwide, the Senator put out a one sentence statement saying Americans had to follow the law.

“I think we can see very directly the need for the Equality Act in West Virginia after this legislative session,” Joseph Cohen, executive director of the West Virginia chapter of the American Civil Liberties Union, said.

Cohen was referencing comments made by Delegate Eric Porterfield, a Republican state legislator who compared LGBTQ people to the KKK and said he would drown his children if they came out to him.

“There’s one House Democrat — one in the whole country — who doesn’t support this civil rights legislation: Dan Lipinski,” the Illinois Congressman’s former primary challenger, Marie Newman, said. “Once again, he’s bucking the Democratic Party to stand against equality, something he’s done consistently throughout his 14 years in Congress.”

Her life was ruined after her famous employer discriminated against her. Now he won’t pay up.