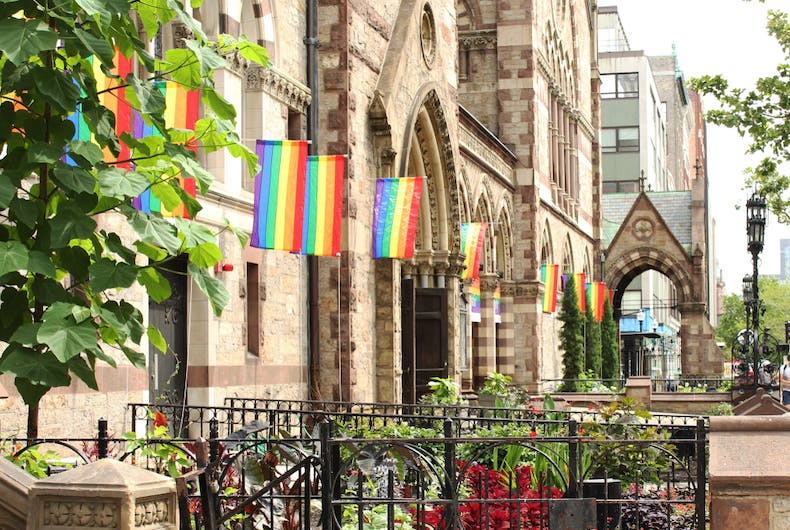 A surprising group came out in favor of the Equality Act this week: evangelicals.

As a record 201 members of U.S. Congress co-sponsor legislation to ban anti-LGBTQ discrimination across the country, polls show that a majority of white evangelical protestants are in favor of fully inclusive civil rights laws. According to the Public Religion Research Institute (PRRI), 54 percent of evangelicals say they are in favor of protections on the basis of gender identity and sexual orientation in housing and employment.

In fact, the country’s most reliably conservative religious group supports proposals like the Equality Act by a 16-point margin. Just 38 percent of evangelicals claim to be opposed to laws that would prevent LGBTQ people from being fired, denied employment, or refused housing based on who they are or who they love.

For the first time, every single religious group in the U.S. is in favor LGBTQ-inclusive nondiscrimination laws. While Jehovah’s Witnesses claim the lowest level of support at 53 percent, few members of the denomination are outright opposed to these protections. Less than a quarter of Jehovah’s Witnesses (23 percent) believe it should be legal to discriminate on the basis of sexual orientation or gender identity.

Meanwhile, 70 percent of Mormons support laws like the Equality Act. So do 68 percent of non-white Catholics, 65 percent of African-American Protestants, 60 percent of Muslims and 59 percent of Orthodox Christians.

Overall, nearly seven in 70 Americans (69 percent) believe discrimination against LGBTQ people should be illegal. Roughly the same number think it already is, despite the fact that 30 states have yet to pass comprehensive statewide laws banning bias on the basis of both sexual orientation and gender identity.

The Equality Act, which was reintroduced last week, would change that by adding LGBTQ identity as a protected characteristic under the Civil Rights Act of 1964 and the Fair Housing Act. The legislation would also ban sexual orientation and gender identity discrimination in areas like public accommodations, federal funding, credit, education and the jury system across the country.

Even before the bill’s reintroduction, a pair of evangelical groups announced their support for inclusive nondiscrimination laws at the federal level: the Council for Christian Colleges and Universities (CCCU) and National Association of Evangelicals.

But even as more evangelicals back civil rights protections for queer and trans people, stark divides persist within religious communities on LGBTQ rights.

A study released last year by the Human Rights Campaign found that just a quarter of white evangelical seniors (25 percent) were in favor of same-sex marriage, even though the majority of young evangelical protestants (53 percent) believe all couples should be permitted to marry.

Meanwhile, evangelicals remain widely supportive of laws allowing people of faith to refuse service to LGBTQ people if they cite a religious reason for doing so. A 2017 survey from PRRI showed that 65 percent of this group felt wedding-based businesses—whether bakers, photographers, or caterers—should have the ability to issue blanket denials to same-sex couples.

Just 29 percent of evangelicals—or less than one-third—were against licenses to discriminate on the basis of faith.

However, white protestants were the only religious group in favor of religious refusal laws. While white mainline protestants agreed with their evangelical cousins, majorities of Hispanic Catholics (73 percent), black Protestants (56 percent) and white Catholics (55 percent) said people of faith shouldn’t have the right to turn away LGBTQ people.

Despite unprecedented support for the Equality Act in Congress and among members of the public, the bill is unlikely to become law with a Republican-controlled Senate and Donald Trump in the Oval Office.