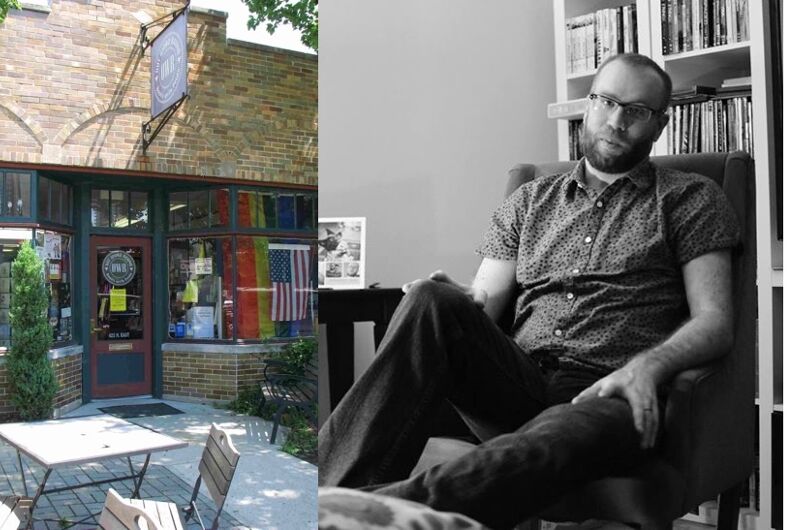 Joe Faust recently shared a touching memory of working in a small gay bookstore in the early 2000s that has gone viral. Faust worked at Indianapolis’ Out Word Bound bookstore at the time.

Inspired by journalist Nicole Cliffe’s tweet asking her followers what the kindest thing a stranger had done for them. Her tweet quickly garnered several touching stories of generosity and kindness, but Faust felt something was missing.

“I wasn’t seeing any specifically pro-queer stories in her feed, and wanted to offer one,” he told LGBTQ Nation. So Faust recounted his story of working as the manager of a gay bookstore when a suicidal man called the shop looking for support.

“We were not a crisis center!” he wrote. “But as long as we’re talking, he’s safe, right?”

Oh God I can’t even tell this story and not cry.
I used to manage an LGBT bookstore, when bookstores were still a thing. One night, a caller says he thinks he might be gay and is considering self-harm. We were not a crisis center!
But as long as we’re talking, he’s safe, right?

As customers continued to browse the merchandise, Faust talked to the man and started to feel a little out of his depth. And that’s when an older lesbian stepped in and asked for the phone.

“And SHE, this 50-something lesbian talks to this stranger on the phone,” Faust tweeted. “And a LINE FORMS BEHIND HER.”

“Every customer in that store knows that call, knows that feeling, and every person takes a turn talking to that man.”

And SHE, this 50-something lesbian talks to this stranger on the phone. And a LINE FORMS BEHIND HER. Every customer in that store knows that call, knows that feeling, and every person takes a turn talking to that man.
That story comforts me so much to this day.

“All told, five of us were on our end of the phone,” Faust told LGBTQ Nation. “Myself and four customers, but only the first customer to take over for me had much to add. The other customers mostly chimed in in solidarity.”

“I was already out, myself, and while this was probably the most dramatic instance of someone struggling with the process, it wasn’t uncommon for us to have customers in the store or on the phone with questions.”

“One of the women who was there that evening came back in several times more. We never talked about that experience with each other, but I certainly recognized her,” Faust remembered. “I told my colleagues about the experience, too.”

“That evening, we didn’t have much of a conversation after the phone call ended. The other gentleman left before it was even over. I thanked the woman who took the phone from me. One of her friends bought a couple books, but I mostly just remember feeling relief and joy.”

Cliffe’s followers also found joy in his story after she retweeted and replied to his story.

All of these stories are amazing, but this made me sob and call my mother.

Thank you so much for this story! I own a LGBTQ bookstore, and have had similar situations happen. Thank you for your bravery!!

But one person may have summed up the story – and the internet’s reaction to it – perfectly.

“Community is such a wonderful thing. It makes all the difference to know you are not alone.”

“I’m very aware that coming out can be exhausting and terrifying and complicated and also deeply personal,” Faust said. “I try not to tell people that it’s always the right choice, but I can say that I’m so glad I did it.”