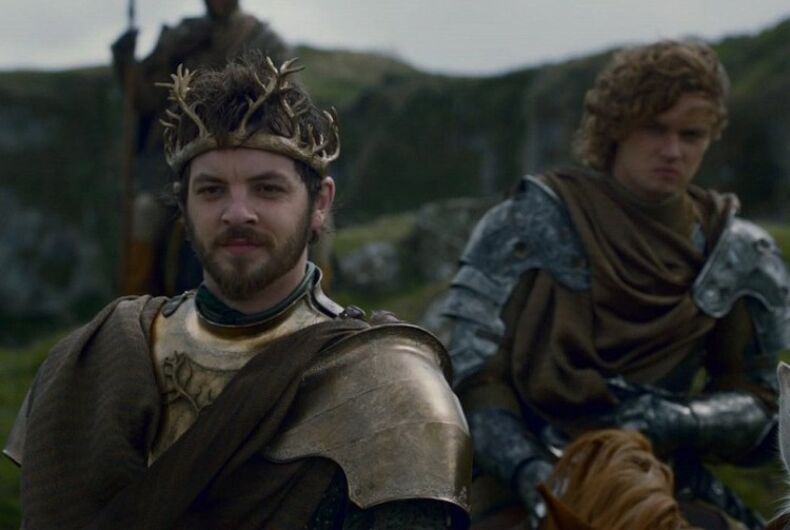 Renly Baratheon and Loras Tyrell were lovers on the hit show "Game of Thrones"Photo: HBO

Editor’s Note: This story has been updated to include a statement from an HBO spokesperson and a tweet the show’s Twitter account sent to the author.

The highly anticipated return of Game of Thrones is almost here and HBO is pulling out all the stops to publicize the final season of the hit show.

But one thing that isn’t a hit with gay and bi fans of the show is a new contest they’re running in conjunction with the Red Cross. They’re asking fans to prove their devotion to “bleed for the crown” by donating blood.

If you donate blood before March 12, you’ll get a free “blood-spattered” t-shirt and be entered to win a trip to the series premiere in New York.

The problem? Most gay and bi men can’t participate. They’re banned from donating blood under current US law.

Related: Watch this male artist’s transformation into the women of Game Of Thrones

Men who have sex with men cannot donate blood unless they have been abstinent for a year before the donation. This makes them unable to participate in the contest.

“It’s kind of a bummer,” Erich Hazen, a Games of Thrones fan, told the Daily Beast. “Here’s this really great prize, but you can’t have it because you’re gay.”

The show is sponsoring an “immersive experience” at the SXSW conference this week that allows participants to “walk in the steps of the characters.”

“Those who earn an audience before the Iron Throne will be recognized and rewarded for their bravery,” they say in the press release announcing the promotion.

“The ‘Bleed for the Throne’ campaign is and has always been open to everyone,” an HBO spokesperson asserted to LGBTQ Nation in an emailed statement.

“Knowing that FDA regulations may prohibit blood donation by some, we have created multiple ways for fans to interact with the campaign, including entry to the activation at SXSW and the season 8 premiere sweepstakes,” they said. “Those unable to donate blood in national blood drives can still enter the sweepstakes by contacting the Red Cross Donor Support Center with a request to be entered, along with their name, mailing address and a valid email.”

“Inclusivity is a key HBO value, and we have long been supporters of the LGBTQ+ community.”

The original press release for the promotion does not list a way for anyone ineligible to donate blood to participate in the contest.

In a separate response, the show’s Twitter account reached out to the author to reiterate that a donation is not required to enter the contest. They pointed to a legal disclaimer that detailed the contest rules and gave a customer care email address for the Red Cross was a way to enter.

So you're basically adding an asterisk to your promotion by sending people to a legal disclaimer without apologizing or even acknowledging that you're excluding your #gay & #bi fans. Even the generic email address screams "DGAF" How Cersei of you :(

“We are incredibly excited to mobilize the global army of Game of Thrones fans to make a positive impact on the world” said Zach Enterlin, Executive Vice President, Program Marketing, HBO.

“In partnership with the American Red Cross, we’re creating a unique platform to engage our tremendously passionate fanbase, and ultimately showcase the bravery and valor of those fans who will go so far as to bleed for the throne.”

Unless, apparently, you’re a passionate gay fan. Because if you’ve played “Renly and Loras” in the past year, you can’t win the throne like everyone else since you can’t “bleed for the crown.” On the show and in real life, that says something about honor.

Donate blood for the good of the realm.#GameofThrones is teaming up with @RedCross to join the fight for the living. Visit https://t.co/5MbSh6Gdlt for more info. https://t.co/RneQng9dQf