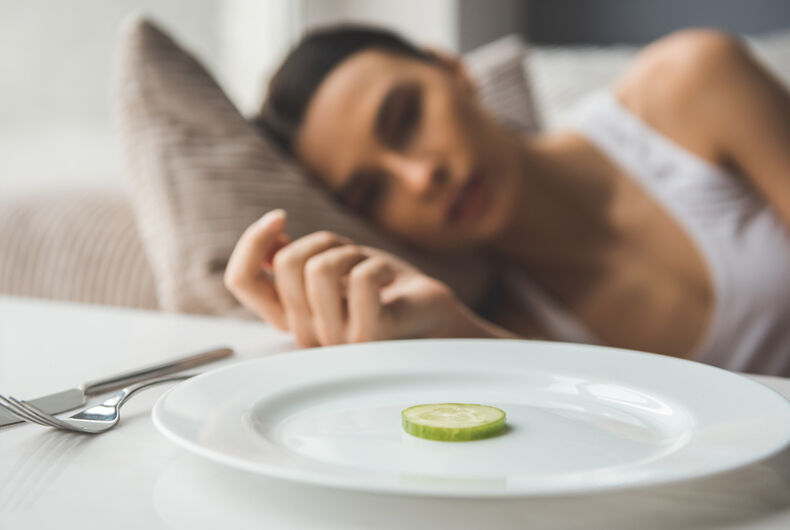 Eating disorders are running rampant amongst LGBTQ youth. A new survey finds that 54% of those aged 13-24 have been diagnosed with one at some point. An additional 21% suspect they have an undiagnosed eating disorder.

The numbers jump even higher when one looks at transgender people, with 71% of straight-identified trans people reporting that they’ve been diagnosed with an eating disorder. Amongst them, anorexia appeared to be the most common.

“We were stunned by these results,” said Trevor Project’s Executive Director Amit Paley via press release. “We need to do far more to help the alarming number of LGBTQ youth living with eating disorders and struggling with thoughts of suicide.”

Related: LGBTQ youth are bullied for their weight almost as much as their orientation & gender identity

“The results make it clear that troubling numbers of LGBTQ youth are affected by eating disorders and self-harm,” said NEDA head, Claire Mysko. “Together, we are working to raise awareness and put live-saving resources into the hands of those in need. It’s time to get real about these issues and ensure that everyone has access to the support they deserve.”

Eating disorders are relatively commonplace, with NEDA reporting approximately 30 million incidences in the United States alone, including people of all ages, gender identities and sexual orientations.

“Unfortunately, it’s not surprising,” said a spokesperson for NEDA, Tony Roness, to NBC News. “It mirrors all the other studies in terms of the significant correlation between individuals in the LGBTQ community and eating disorders.”

NEDA lists several potential factors that may be behind the number of eating disorders among LGBTQ youth, including fear of rejection, internalizing negative messages or beliefs about one’s sexual orientation or gender identity, amongst other factors.

Roness, a gay man who has fought with anorexia and body dysmorphia, points to his struggles reconciling his Christian upbringing with his sexual orientation as an underlying stressor that influenced his eating disorder. He says negative societal messages around being LGBTQ play a large role in the prevalence of eating disorders amongst the LGBTQ community.

“Whether it’s your faith or your family or society in general, it comes down to self-worth and the perception of value,” said Roness. “Many in the LGBTQ community don’t realize or don’t know that they are valued and are subjected to messages that say otherwise.”

The survey was released to coincide with National Eating Disorders Association Awareness Week.