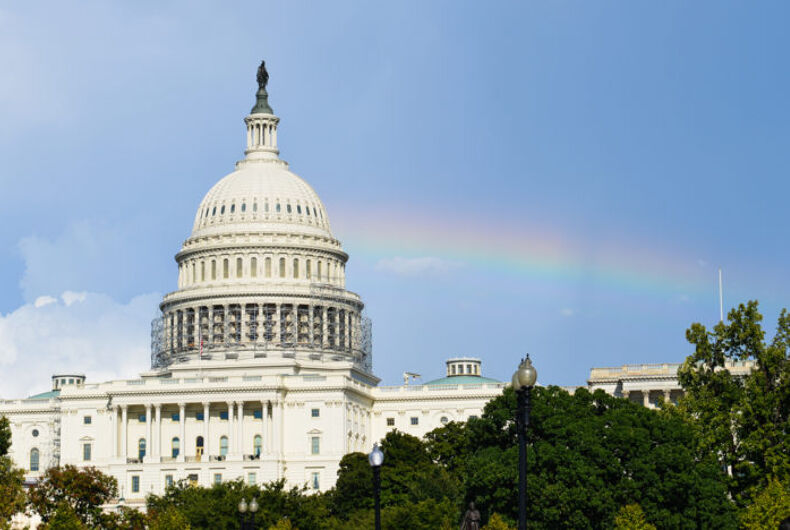 A federal bill that would create LGBTQ civil rights protections was introduced in both houses of Congress today.

The Equality Act would add sexual orientation and gender identity to the Civil Rights Act of 1964, which would ban discrimination against LGBTQ people in housing, employment, public accommodations, education, credit, and several other areas.

Currently, only 22 states have banned job discrimination based on sexual orientation and gender identity, and not all of them have banned other forms of discrimination, like in public accommodations and education.

Numerous studies over the past several years have shown that employment discrimination against LGBTQ people is a serious problem, resulting in lower pay and increased poverty.

“The Equality Act is essential because, while the legal landscape is evolving rapidly, LGBT Americans continue to face appalling, unjust discrimination in many aspects of their everyday lives,” said Lambda Legal’s CEO Richard Burns in a statement.

“We know this from the thousands of calls Lambda Legal’s Help Desk gets each year from all corners of our country. Specifically, we know that workplace discrimination is one of the most frequent problems that LGBT people face.”

Related: Let’s debunk some homophobic claims about the Equality Act

“We want to live in a country that, you know, judges people based on their performance and their character, and so we need to pass the Equality Act at the federal level,” said Senator Tammy Baldwin (D-WI), who introduced the bill in the Senate along with Senators Cory Booker (D-NY) and Jeff Merkley (D-OR).

Representative David Cicilline (D-RI) introduced the bill in the House.

The bill has 280 cosponsors in the House and Senate, the most it has ever had.

Late last year, Speaker Nancy Pelosi (D-CA) promised that the Equality Act would be a priority for the incoming Democratic House, so it is likely that it will come up for a vote there.

But getting a vote on the bill in the Republican-controlled Senate will be more difficult. Baldwin told NBC that she believes that a majority of the Senate would vote for the bill, but that there might be 41 senators who would filibuster the bill.

The Equality Act was introduced in the previous two Congresses in 2015 and 2017, but it died in committee both times despite getting over 200 cosponsors in the House and Senate each time.

A recent poll from the Public Religion Research Institute found that 69% of Americans support legislation that bans discrimination against LGBTQ people in employment, housing, and public accommodations, and a majority of each state does as well.

While support was highest among Democrats, even 56% of Republicans support anti-discrimination legislation.

LGBTQ organization applauded the introduction of the bill.

“The new pro-equality majority in Congress has the chance to finally ensure LGBTQ people’s rights are not determined by what side of a city or state line they live on.”

“Black trans women and experience economic insecurity and homelessness at rates far higher than other communities as a result. The protections provided by the Equality Act ensure everyone has the ability to maintain jobs and access housing and other public accommodations so they can provide for themselves and their families.”