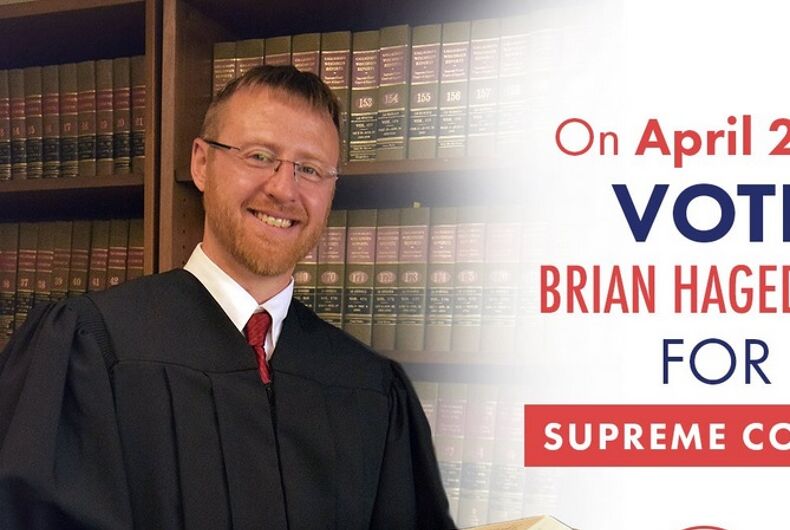 Extreme statements about gay people made by a candidate for the Wisconsin state supreme court have been uncovered and they are shocking.

“The idea that homosexual behavior is different than bestiality as a constitutional matter is unjustifiable,” Hagedorn wrote in a blog post discussing the 2003 Supreme Court decision Lawrence v. Texas, which legalized homosexuality throughout the U.S.

“There is no right in our Constitution to have sex with whoever or whatever you want in the privacy of your own home (or barn).”

Hagedorn would have been a 27-year-old student at Northwestern University’s law school at the time.

On his blog, he referred to his readers as “fellow soldiers in the culture wars” and said that fighting LGBTQ rights is one of his life goals.

“The Lord has laid three fundamental passions on my heart: 1) Protecting the dignity and sanctity of human life, 2) Defending and preserving the institution of marriage, and 3) Promoting racial reconciliation in the church and culture,” Hagedorn wrote in a November 2005 post.

He also said that he hated Planned Parenthood, which he called “wicked,” because the organization is more devoted “to killing babies than to helping women.”

In another post, he wrote that Christians make better Supreme Court justices.

“All things being equal, someone who acknowledges the true God, seeks wisdom from Him, and cares about all people because they have been made in His image is better than someone who is not a Christian.”

“I am not so naïve as to suppose that the judge’s ideological orientation won’t influence his interpretation of what the law is in difficult cases,” he said.

“But that is quite different from a judge who is prepared to disregard the law in pursuit of his ‘fundamental passions.'”

In a statement, Hagedorn’s campaign said that his beliefs will not affect his work.

“When he put on the robe, Judge Hagedorn took an oath to be impartial and apply the law on every case, and he will always be faithful to that oath and to the people he serves,” the statement said.

“He believes personal political values have no place on the Supreme Court and his job is to say what the law is, not what he thinks the law should be.”

“Hagedorn’s anti-LGBTQ rhetoric is deeply disturbing, and as someone who has publicly and unabashedly voiced contempt for LGBTQ equality he has no place on the bench or in public office,” said Wendy Strout, the director of HRC Wisconsin.

He faces Judge Lisa Neubauer in the upcoming election for state supreme court.