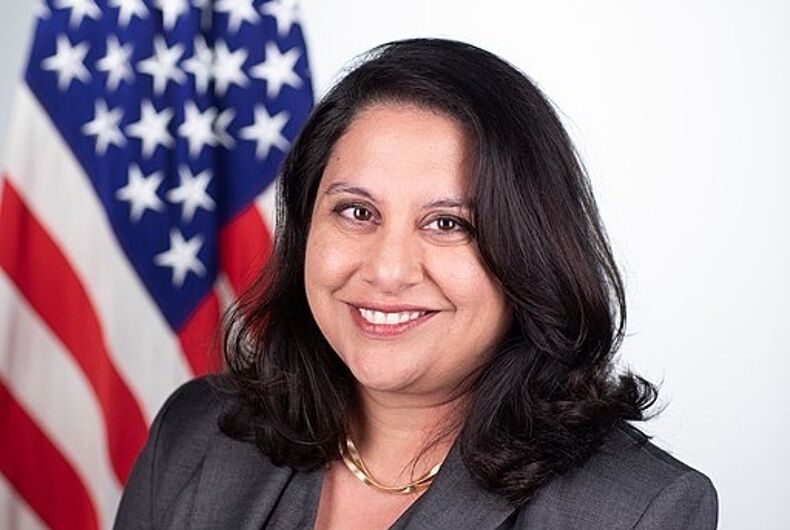 Neomi Rao, is undergoing hearings this week ahead of a possible confirmation to the U.S. Court of Appeals for the D.C. Circuit Court, taking the seat on that court vacated by Supreme Court Justice Brett Kavanaugh.

Her nomination won’t go without a fight, as several rights organizations have stepped up against the nominee, pointing to her long history of statements opposing to the rights of minorities blaming victims for their own sexual assaults.

“This is the second most powerful court in the land. It has special duties in reviewing public protections involving the safety and rights of all communities. Replacing Brett Kavanaugh on this court with Naomi Rao is going from bad to worse.”

Leadership Conference on Civil and Human Rights’ president Vanita Gupta, echoed Johnson’s views, saying, “Neomi Rao has already proven that she is incapable of serving as a fair and impartial judge on the federal bench. Her past is her prologue.”

Related: Trump’s choice to replace Brett Kavanaugh is every bit as bad as he is

Rao’s own past has included writings from her college years, including a 1994 essay in the Washington Times, where Rao argued that “multiculturalism” was undermining American culture, saying “[Multiculturalists] argue that culture, society and politics have been defined — and presumably defiled — by white, male heterosexuals hostile to their way of life. For example, homosexuals want to redefine marriage and parenthood.”

In today’s hearing, she attempted to reframe what she said then, claiming it was simply a push for  “more unification.”

Rao has also long been soft on sexual abuse, often times blaming the victim in such crimes. For example, in a 1994 article for the Yale Herald, Rao said, “A man who rapes a drunk girl should be prosecuted. At the same time, a good way to avoid a potential date rape is to stay reasonably sober. And if she drinks to the point where she can no longer choose, well, getting to that point was part of her choice.”

Rao attempted to walk this back during today’s confirmation hearing, saying, “I cringe at some of the language I used,” but still contending she was attempting to make a “common sense” statement that women should take steps to protect themselves from sexual assault.

“Her controversial writings set the stage for the damage she has done as President Trump’s Administrator of the Office of Information and Regulatory Affairs (OIRA), where she has led the Trump administration’s aggressive regulatory agenda to undermine civil rights and public protections,” Gupta added.

“Rao’s demonstrated hostility to the civil and human rights of all should disqualify her from a lifetime appointment on the federal judiciary.”

Lambda Legal heightened Rao’s use of offensive racial slurs, such as referring to people as “oreos” in past writings.

“Neomi Rao lacks the judgment and credibility to be an independent and impartial judge on any court,” said Legal Director and Chief Strategy Officer at Lambda Legal, Sharon McGowan. “Her use of racial slurs and her early writings on sexual assault, diversity, and marriage equality should immediately disqualify her from any nomination for a lifetime appointment, just as they have for other nominees.

In today’s hearing, Rao was unwilling to say that Brown v. Board of Education, a landmark case that ended school segregation, was correctly decided. She also refused to speak to her views on Griswold v. Connecticut — which struck down a law that criminalized the use of contraceptives — or Roe V. Wade.

She also refused to go on record about her views towards same-sex marriage and if it is “sinful,” saying instead that she would put her personal views to “one side” and “faithfully follow the precedence of the Supreme Court.”

The Alliance for Justice has also spoken out about the confirmation, with AFJ President Nan Aron paying close attention to her statements on sexual abuse.

“Neomi Rao’s record of offensive statements about women, sexual assault survivors, LGBTQ people, people of color and the environment is matched only by her track record of advancing federal government policies that are deeply harmful to these same communities and interests,” said Aron. “It only makes matters worse that she is being named to the nation’s second-highest court and to the seat once held by Brett Kavanaugh, who has faced credible allegations of sexual abuse. Senators should understand that a vote to confirm Neomi Rao is a slap in the face to some of the most vulnerable people in our society.”

In April of 2017, Rao was nominated by President Trump as the administrator of the Office of Information and Regulatory Affairs (OIRA) within the Office of Management and Budget. She has never had to try a case in front of a state court nor a court of appeals, and has not previously served as a judge.

Trump initially nominated Rao to replace Brett Kavanaugh in November of last year, but her nomination was returned to the president at the adjournment of the previous congress. He re-nominated her on January 23.

As of that date, the administration has confirmed 85 judges, including two Supreme Court Justices. The majority of these have been extreme-right voices.

Americans put Hitler on trial in absentia in the 30s. Can we do the same with Trump now?