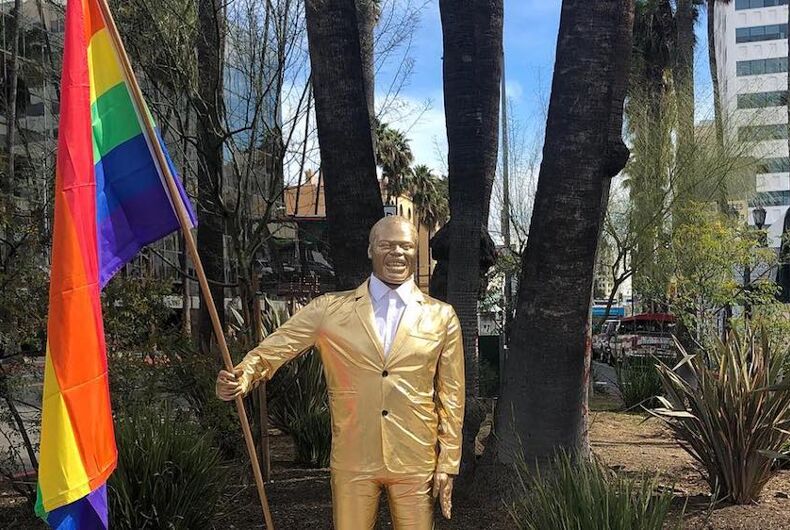 Just before this weekend’s Academy Awards, an artist known as Plastic Jesus has installed a golden statue of comedian Kevin Hart holding a rainbow flag with the words “Hollow Apology” written beneath it.

The statue, located just around the corner from Hollywood’s Dolby Theater (the awards show venue), is a reference to Hart’s angry apologies issued to the LGBTQ community after people unearthed his years-old homophobic comments.

Hart resigned as the host of the 2019 Academy Awards and issued several begrudging apologies to the LGBTQ community after initially refusing to apologize for anti-gay jokes and slurs he made in 2010 and 2011.

Initially, Hart deleted his Twitter account’s anti-gay tweets which resurfaced shortly after being announced as the Oscars host. When asked to apologize by online commenters and the Academy Awards itself, Hart initially refused twice-over before eventually stepping down as host and apologizing via Twitter.

Soon after his apology though, he went on Ellen DeGeneres’ daytime talkshow and called his critics “haters” who were trying to destroy his career. He also claimed that he’d previously apologized for his homophobic comments even though no public record of any such apology exists.

Despite the incident, Hart remains one of the most successful comedic film actors in Hollywood and is expected to appear in an upcoming film based on the board game Monopoly.

Related: Here is the ‘In Memoriam’ video they didn’t show you at the Oscars

“AND THE WINNER IS…”. This year’s Oscar statue ‘Hollow Apology’ featuring Kevin Hart. Over the past decades most countries have made great inroads fighting homophobia and hate, however the current divisive rhetoric seems to have taken us back to the 1970’s. So much of the Entertainment industry output comes from LGBTQ Individuals we should be celebrating it and not creating a hateful environment.

The street artist has also erected other satirical golden statues in past years. In 2018, he created one of accused sexual harasser and Hollywood producer Harvey Weinstein lounging in a robe, entitled “Casting Couch.” In 2017, he erected a statue of rapper Kanye West with his arms outstretched like Jesus Christ, entitled “False Idol.”

He also once placed prison bars around Donald Trump’s star on the Hollywood Walk of Fame.