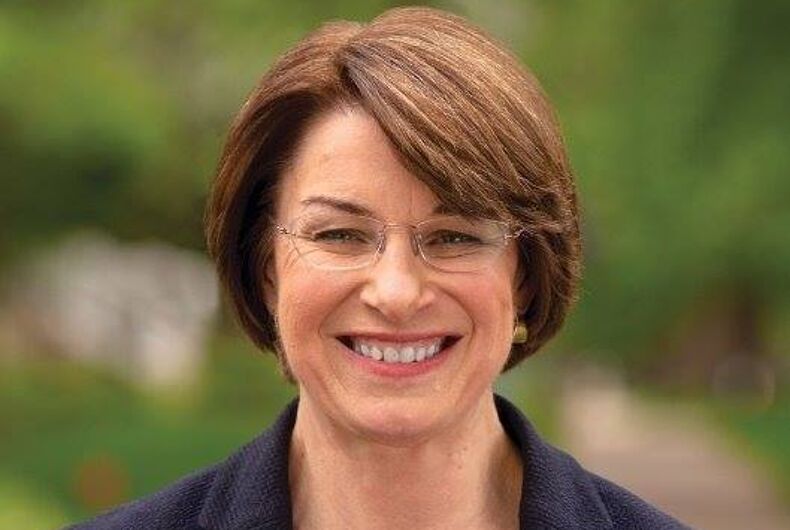 Add another to the list of president wannabes: At a snowy rally in Minneapolis, Amy Klobuchar, the Democratic Senator from Minnesota, formally announced that she’s running for the party’s nomination.

While most people outside her home state don’t know Klobuchar, she’s a credible candidate with as much a chance of winning as anyone. Here’s a look at her background and record.

Her resumé. Klobuchar is a Minnesota native who graduated from Yale and the University of Chicago Law School. She began her career as a corporate lawyer in her home state before being elected prosecutor for Hennepin County (which includes Minneapolis). She was elected Senator in 2006 and was easily re-elected in 2012 and 2016.

She’s a prolific legislator; in 2016, she was ranked as the Senator who has successfully passed the most bills. She doesn’t have a signature issue, the way Warren does. Instead, she’s been behind bills that cover everything from toy safety to human trafficking. In general, she’s a standard issue Democrat who has positioned herself as a pragmatist willing to work with Republicans.

Her moment in the spotlight came during the hearings for Brett Kavanaugh’s Supreme Court nomination. In response to Klobuchar’s questioning Kavanaugh about whether he’d ever blacked out from drinking, he snidely responded, “Have you?”

Why she’s running (in her own words). “We are all tired of the shutdowns and the showdowns, the gridlock and the grandstanding. Today we say enough is enough.”

Campaign theme. In a word, pragmatism. Her campaign site talks a lot about the need to rise above petty partisan politics, coupled with fairly generic language about making America a land of opportunity again. In her announcement address, Klobuchar checked a lot of the expected boxes—decrying voter suppression and “big money”—but we’ll have to wait for the policy details.

LGBTQ record. Klobuchar has been a solid supporter of LGBTQ rights in the Senate. She’s consistently pulled 100 percent ratings from the Human Rights Campaign. She fought for the repeal of DOMA and has criticized the Trump administration’s anti-transgender military policy.

Tellingly, however, Klobuchar let Harris and Cory Booker take the lead in interrogating Brett Kavanaugh over his views on LGBTQ issues. That deference highlighted the fact that the Senator doesn’t have the same deep ties to the LGBTQ community that some of her rivals, including Harris, Booker and Julián Castro have.

Pros to her candidacy. After living with the orange rage of Trump, Klobuchar’s “Minnesota-nice” persona is a welcome relief. In last year’s re-election, Klobuchar carried counties that voted for Trump in 2016. With most of the swing states being in the midwest, having a midwesterner as the nominee could pay off in the Electoral College.

Her emphasis on a being a pragmatist willing to work with the GOP is exactly what voters tired of gridlock want to hear. And being a woman appeals to the party’s increasing focus on diversity.

Cons to her candidacy. A significant number of Democrats want a progressive, not a pragmatist, as the nominee. Klobuchar may be a productive senator, but she hasn’t been at the forefront of the red-meat issues that hardcore party members want to hear about.

In fact, one of her first challenges will be to define herself to the voting public which knows little about her. That challenge hasn’t been helped by the slew of stories that came out just before her presidential announcement casting her as one of the worst bosses in the Senate. The stories of traumatized former staffers is at odds with her public image.

Her odds. It’s a wide open race, and Klobuchar has a number of things going for her candidacy. If she can gain traction in the crowded field, she has a real shot at becoming the nominee.