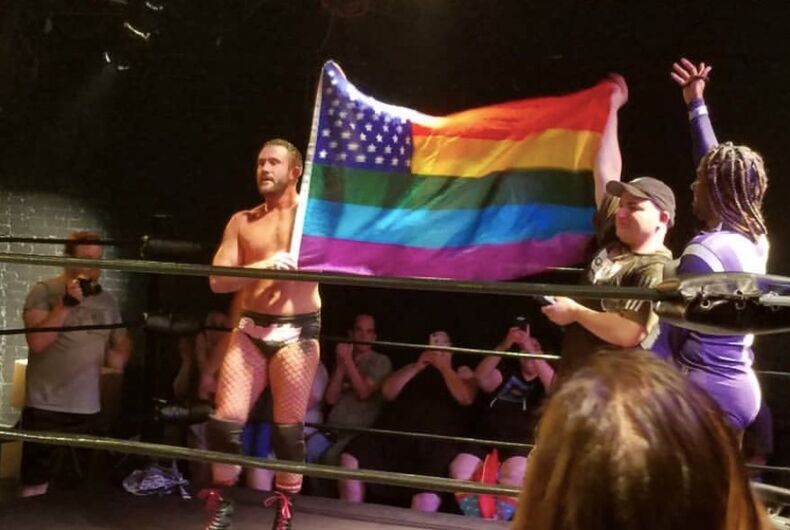 Professional wrestling in America has a long and homophobic history filled with flamboyant villains but very few out-and-proud LGBTQ-identified athletes. Rick Cataldo wants to change that.

Inspired by female wrestlers he saw growing up, Caltado dropped out of high school at age 14 to start working a busboy and training twice a week to become a pro wrestler. He didn’t care about becoming an Adonis—he wanted to become a character that would allow him to embrace his queerness.

During his career, he performed with exoticos, flamboyant openly gay lucha libre wrestlers in Mexico. Now, years later and back in America, Caltado is known as “The Boy Diva” and he runs A Matter of Pride, an all-queer wrestling event that seeks to give queer wrestling fans a place to see authentic queer representation of “all shapes, sizes and backgrounds.”

“Gay wrestlers are treated as a novelty act [in pro wrestling] and we’ve been treated like that for years,” Caltado says. “But now I feel like there’s a window opening up in wrestling culture and we could really make an impact.”

When he first started wrestling, a lot of promoters and bookers, didn’t take Caltado seriously. “They thought I didn’t belong in the ring,” he says. “They thought I was a waste of time.” When he was booked, other male wrestlers saw his gender bending as an unwelcome disruption to their jock atmosphere and would throw his gym bag out of the ring.

Related: “Drag Syndrome” is a fierce drag show where all the performers have Down’s Syndrome

While Caltado worries about costume malfunctions, no-show performers and injuries during his Matter of Pride events, he also puts on a good show filled with wrestlers in drag, female wrestlers, mixed gender matches and tough heels and babyface jobbers (that is, brutal villains and handsome punishment sponges).

One of the Matter of Pride wrestlers, Billy “The New Classic” Dixon, says, “When you’re a queer person in a very hyper-masculine environment, your femininity is looked at as a joke. It’s looked at as something you should be ashamed of.”

Dixon started off as a very masculine wrestler. But as he got a reputation for being tough in the ring, he gradually felt more comfortable embracing his femininity in the ring.

Here’s a video of Caltado and the Matter of Pride wrestlers:

Dixon says, “One of us in [Matter of Pride] is gonna be on national television in five to ten years, but only one of us. Whoever that person is, we’re gonna root for them, because that person is gonna break the m*therf*ck*ng glass ceiling.”

Even if you don’t like wrestling or violence, it’s still kinda jaw-dropping to see these queer athletes doing super heroic moves and allowing others to see their larger-than-life authentic selves.