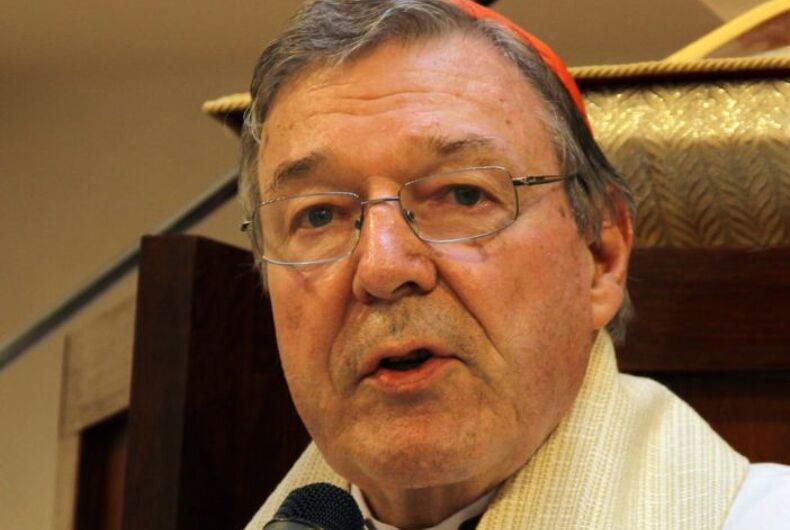 One of the most powerful men in the Catholic Church has been found guilty of sexually assaulting two underage boys.

One of the victims testified about the events that took place in December of 1996. The victims were 13-years-old choirboys at St Patrick’s Cathedral in Melbourne, and the two sneaked into the priests’ sacristy and drank some wine.

Pell, who was then Archbishop, found them and told them they were in trouble. He exposed himself and forced them to perform oral sex on him. Then, the victim said, he masturbated them and himself.

A month later, the victim said that Pell pushed him against a wall and grabbed his genitals.

The victim said that Pell “emanated an air of being a powerful person,” and he was worried about losing his scholarship to a Catholic school if he spoke out.

The other victim died in 2014 from a heroin overdose.

Years after he raped the two boys, Pell became one of Australia’s most prominent anti-gay voices. In 2002, he denied communion to gays and lesbians.

“God made Adam and Eve, not Adam and Steve, and important consequences come from this,” he said at the time.

“Our Judeo-Christian religious tradition allows men and women sexual expression within the bounds of family life, a sexuality which is life-giving,” Pell said.

“Homosexual acts are contrary to the natural law. They close the sexual act to the gift of life.”

In 2012, he spoke out against marriage equality, saying that it would harm children.

Pell was a member of the Congregation for the Doctrine of the Faith, an ideological body within the Catholic Church that has long attacked LGBTQ equality.

Pell, who is the third most senior person in the Vatican, put together an all-star legal team, including one of Australia’s most expensive defense attorneys, Robert Richter.

Several of the witnesses had trouble recalling events from over 20 years ago. Still, the jury unanimously believed the victim’s testimony and returned five guilty verdicts.

Sexual abuse survivors gathered outside the courthouse in Melbourne to jeer Pell as he was taken to a car.

“You’re going to burn in hell. Burn in hell, Pell,” one said.

The victim, who cannot be named in the media, said that he has suffered “shame, loneliness, depression” since the abuse.

His lawyer said that he maintains his innocence and that he plans to appeal.

Pope Francis has yet to comment on the conviction.

Update: A Vatican spokesperson said that the church will take no action on the case until Pell’s appeals have been exhausted.

“We reiterate the utmost respect for the Australian judicial authorities,” the spokesperson said.

“In this respect, we now await the outcome of the appeal process, recalling that Cardinal Pell has reiterated his innocence and has the right to defend himself to the last degree.”

South Dakota kills bill that would have held back transgender athletes

A school forced a trans teen to use an ‘enhanced privacy locker room.’ He’s suing.