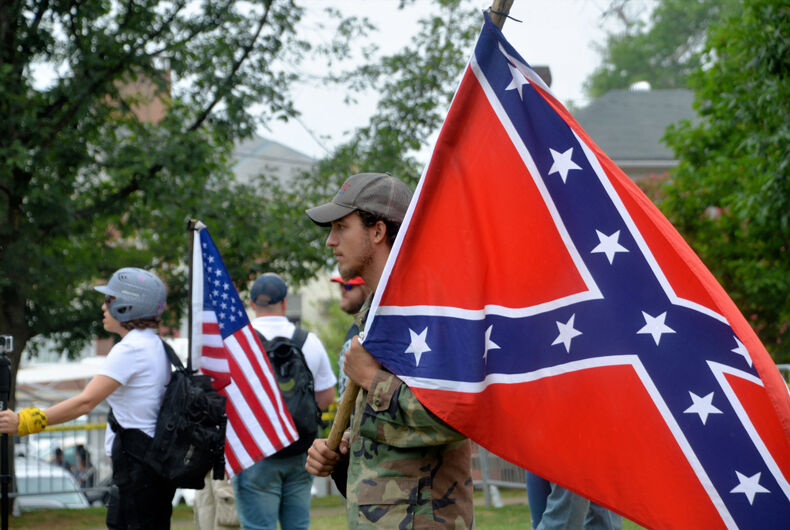 CHARLOTTESVILLE, VA - August 12, 2017: Members of a white supremacist group at a white nationalist rally that turned violent resulting in one death and multiple injuries.Photo: Shutterstock

The number of hate groups in the United States is now at its highest level in two decades according to an annual survey from the Southern Poverty Law Center (SPLC) released on Wednesday.

Hate groups have grown 30% in the last four years, with a 7% rise in hate groups just in 2018. The SPLC has listed 1,020 hate groups on their current survey, the highest number of such in at least 20 years.

The SLPC blames the overall increase on a number of factors, from Trump to the right-wing media’s influence and the increasing use of social medial platforms for spreading hate speech.

The growth in hate groups is largely fueled by white nationalist organizations, which have grown from 100 in 2017 to 148 in 2018. This resurgence has been especially strong in the era of President Donald Trump and has only grown after the “Unite the Right” rally held in Charlottesville in 2017 that lead to the death of Heather Heyer.

“Trump’s words and actions are giving sanction to hateful views among millions who increasingly don’t have a problem with racism and white supremacy,” reads the report.

The groups tracked by the SLPC cover a lot of ground, from obvious and longstanding hate groups like the Ku Klux Klan and the American Nazi Party to anti-LGBTQ groups such as the Family Research Council (FRC) and Alliance Defending Freedom (ADF).

These last two have grown in prominence under the current administration, with both meeting regularly with administration officials and providing support to efforts to roll back LGBTQ protections at the federal level. A memo released by the Trump administration to ban transgender people from the military, for example, included materials provided by the FRC.

“The Trump administration provided safe haven for anti-LGBT groups and individuals throughout the year, with a particular onslaught on transgender people in 2018,” reads the report. “Anti-LGBT evangelical groups continue to enjoy unprecedented access to the White House and are intimately involved in forging public policy.”

The SLPC lists a total of 49 anti-LGBTQ groups.

The Southern Poverty Law Center was formed in 1971 as a civil rights law firm. It has since grown into a highly-respected legal advocacy organization dedicated to fighting hate and bigotry across the United States.

Many of these groups in the report have tried to delegitimize the work of the SLPC, as well as get delisted as a hate group with the organization, to little avail.