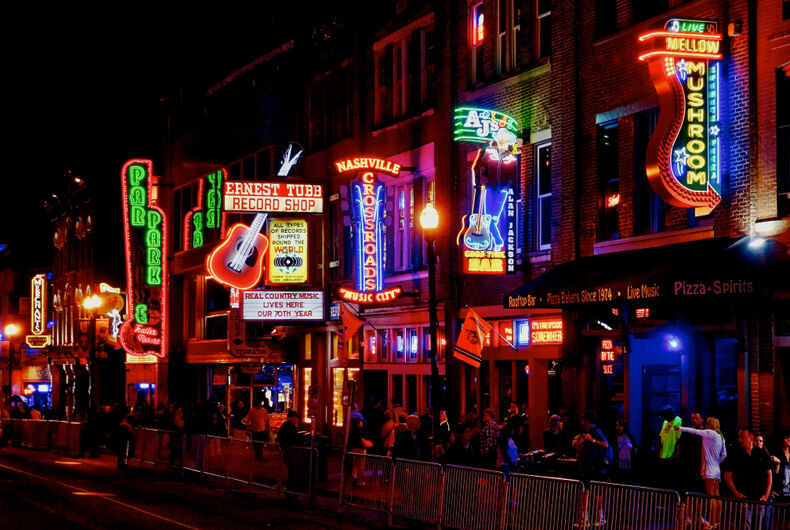 As Tennessee lawmakers pursue legislation targeting the LGBTQ community, Nashville Mayor David Briley signaled on Monday there will be no hate in his city.

Briley signed an executive order intended to boost LGBTQ-owned businesses in “Music City, U.S.A.” The order allows Nashville businesses to register as being LGBTQ-owned in order to make them eligible for resources devoted to furthering minority- and women-led companies.

Currently, Nashville offers programs to help these businesses identify opportunities to partner with the city government for contracts.

Upon signing the initiative, Briley said it was intended to “reflect the diversity of Nashville in its hiring practices, contracting and economic development opportunities through the delivery of equitable programs, services and policies.”

“It’s my job as mayor to make sure that everyone in our city, regardless of who they are or where they come from, has equal access to economic opportunities,” the first-term Democrat said in a statement. “Today, we’ve taken an important step towards better equity for LGBT-owned businesses in Nashville.”

The order is the first of its kind in the South. According to the National Gay and Lesbian Chamber of Commerce (NGLCC), similar policies were enacted last year in Baltimore, Hoboken, N.J., and Jersey City, N.J.

Councilmember Nancy VanReece said the historic initiative was personal for her. After moving to the city 33 years ago, she launched a series of startups—joining the Nashville LGBT Chamber of Commerce in 1998. She claimed that at the time businesses like her’s “weren’t offered assistance.”

“That stops now,” she said in a statement. “As the first out woman elected to a legislative body in the State of Tennessee, I couldn’t be more proud of Nashville today, and I thank Mayor Briley for his leadership.”

The policy reflects Nashville’s long commitment to LGBTQ rights, despite residing in one of America’s reddest states.

In 2009, Nashville enacted an order barring discrimination against city employees on the basis of gender identity and sexual orientation. Two years later, the metropolitan area of 660,000 extended those protections to contractors who do business with the municipal government.

However, Tennessee’s largest city has frequently faced opposition from leaders in the state capitol.

LGBTQ groups like Lambda Legal and the National Center for Lesbian Rights have sought to overturn the preemption law, thus far unsuccessfully.

A similar divide could be brewing in 2019. As LGBTQ Nation previously reported, Republican lawmakers in the Tennessee General Assembly are pushing a pair of bills that would allow adoption and foster care agencies to turn away same-sex couples.

Similar legislation was passed last year in Kansas and Oklahoma.

This week conservatives also reintroduced the Tennessee Natural Marriage Defense Act. First put forward in 2016, it seeks to “defend natural marriage between one man and one woman regardless of any court decision to the contrary.”

Two years ago, Haslam signed a watered-down version of a bill originally designed to  protect the “natural and ordinary” meaning of words like “husband” and “wife.” Like the Natural Marriage Defense Act, it was viewed as a strike against the U.S. Supreme Court’s landmark 2015 ruling to legalize marriage equality.

No matter what legislation comes down the pipeline, Briley vowed Nashville would continue to stand in the way of anti-LGBTQ bigotry.

“We want to make sure that in this moment of prosperity, that no matter who you love or what you look like or no matter what your background or gender … you have a level playing field and fair shot at prosperity,” the mayor said.

Did Ellen forgive Chris Pratt for attending an anti-LGBTQ church?