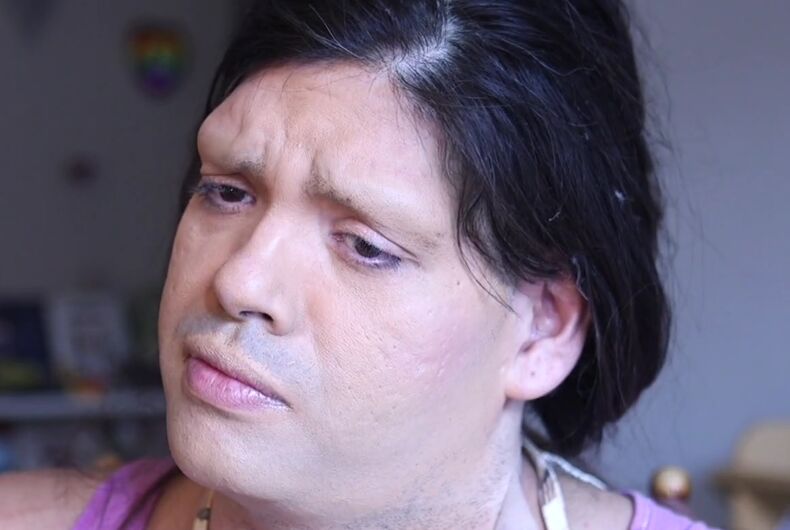 A transgender woman in Henderson, Nevada, was shot in the neck by a neighbor last month.

Kenneth Lamont Martin, 44, has been arrested for shooting Elizabeth Cole, 43, in what police are calling a hate crime.

Cole said that the problem started when Martin flicked a lit cigarette from his upstairs unit on their apartment complex’s complex’s porch.

She was able to put out the fire before it got out of control, and she went to tell Martin that what he did was careless.

He accused her of “getting in [his] face.” He called her a “faggot” and started punching her, she said.

Martin then allegedly said, “I have something for you,” and went to his apartment.

He returned with a gun, pointed it at Cole’s head, and said, “I’m going to kill you, you fucking faggot.”

She went back into her apartment and called 911, but then she opened her door to see what kind of car he had. Martin was still there with his gun and he shot her in the neck.

Doctors said that the bullet missed the major arteries in her neck and got lodged in her neck muscles.

The bullet is still in her neck and might not be removed. She has vision trouble in one of her eyes now and paralysis in one of her legs.

Cole said that this isn’t the first time she’s been attacked for being transgender.

Martin was arrested and is being held on $150,000 bail. His girlfriend told police that he had previously referred to Cole with slurs.

Cole started a GoFundMe to raise money for medical expenses. She has raised just over $500 of her $125,000 goal so far.

“Being who you are is so important, it’s worth dying for,” she said.

When they found out trans students were in need, these Hoosier teens stepped up to help out