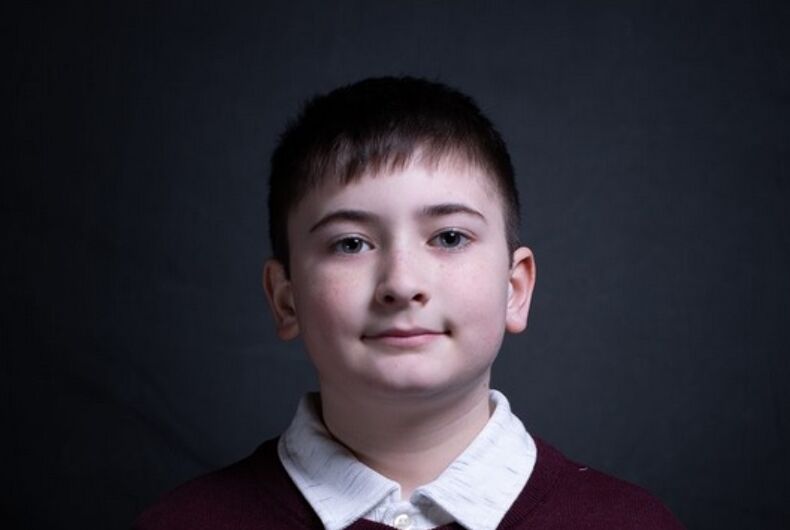 The White House announced that an 11-year-old named Joshua Trump will attend the State of the Union (SOTU) address because he has been bullied for sharing President Donald Trump’s last name.

It’s tradition at the SOTU for elected officials in Washington to invite a constituent, often someone who represents an issue that the politician wants to bring some attention to.

For example, four members of Congress are inviting transgender servicemembers to draw attention to the transgender military ban.

Speaker Nancy Pelosi (D-CA) is inviting Fred Guttenberg, the parent of a Parkland shooting survivor, to bring attention to the issue of gun violence.

Related: Melania Trump promotes anti-bullying campaign by saying she’s the ‘most bullied person in the world’

And the Trumps’ guests includes Joshua Trump, a 6th grader in Delaware who says he has been bullied because of his last name. He was invited to draw attention to the serious issue of people being bullied.

The White House website says Joshua “appreciates science, art, and history” and “also loves animals and hopes to pursue a related career in the future.”

But life isn’t all art history and petting zoos for the 11-year-old Joshua.

“Unfortunately, Joshua has been bullied in school due to his last name. He is thankful to the First Lady and the Trump family for their support.”

According to his mother, the other kids on the bus often chant “Dump Trump,” and the bullying has gotten him to the point that he “hates his last name.”

Many are questioning what message the Trumps are trying to send by having Joshua as a guest. The issue of bullying in school is serious, although for the vast majority of the victims of bullying, it has nothing to do with sharing Donald Trump’s last name.

Feel bad for this Joshua Trump kid who got invited to the SOTU because he gets bullied due to his name, but it’s pathetic that the one time Trump (the biggest bully out there) cares about bullying it’s only because his last name is involved.

If Melania Trump cared about bullying, she could have invited queer youth, who are almost twice as likely as straight kids to avoid school out of fear for their safety.

She could have also invited transgender students, whose federal protections were rescinded in 2017 when the Trump administration nixed Obama era guidelines that banned discrimination against transgender people in public schools.

But Trump, who has a history of name-calling and bullying political opponents, is perhaps only able to empathize with the victims of bullying if they share a trait with him, like his last name.

The Trumps’ other SOTU guests include family members of two people who were killed by an immigrant, to drum up xenophobia by portraying immigrants in a negative light.

The White House is also inviting two people associated with the Tree of Life Synagogue in Pittsburgh. Last year, a rightwing conspiracy theorist killed eleven people at the synagogue after saying he believed that the Hebrew Immigrant Aid Society was bringing immigrants into the U.S., or, as he called them, “hostile invaders to dwell among us.”