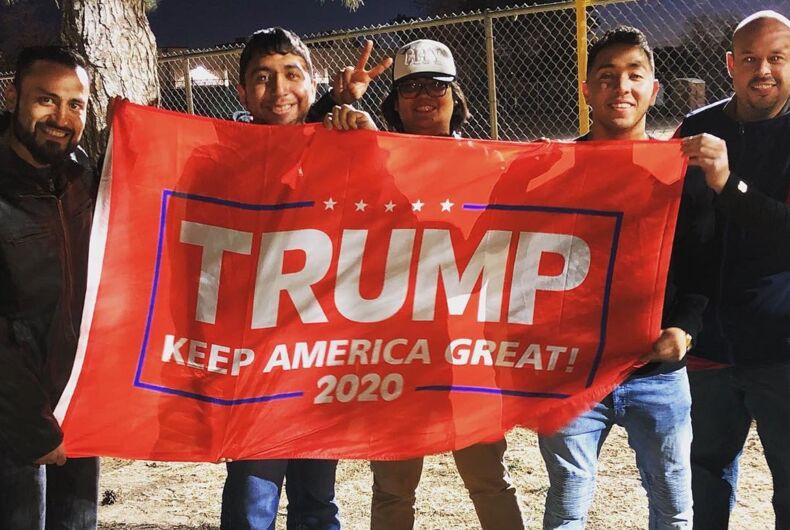 Johnny Alcantar poses with friends behind a banner during a Donald Trump rally in El Paso.Photo: Instagram

Johnny Alcantar is one of five people who owns a gay bar called the Old Plantation, also known as the OP, in El Paso, Texas. This week, as Donald Trump went to the city to bolster support for his presidency and his southern border wall proposal, Alcantar decided to head to Trump’s rally.

While there, he took a photo of himself and other Trump supporters behind a Trump 2020 banner.

In response to the post, local DJ and drag queen Puto Kahlo took to their own social media page to call out Alcantar.

Kahlo continued, “y’all, straight people are the first to try to profit off of our community and our art but won’t hesitate to support a man who has called trans people burdens, hasn’t done shit for community but try to erase us, degraded women, and perpetuated racist and xenophobic rhetoric.”

“It’s so easy to buy a space and slap the OP’s name on it – but how much do you REALLY know about us and what have you done for the community? ‘Cause right about now, your position is looking pretty questionable,” concluded Kahlo.

Alcantar apologized for his post on KTSM-TV, claiming he did not know anything about Trump’s stance against LGBTQ people.

“It was never my intention to hurt anyone,” said Alcantar. “I didn’t know the stuff that Trump was passing. But I have to support our President because he’s our current president; I don’t have any other choice.”

The Old Plantation was closed for several years. Now, with Alcantar’s actions, it is threatened with a boycott that could shutter the space once again.

The CEO of the Old Plantation, Mark Adkins, took to the club’s Facebook page to try and quell concerns, apologizing to the local community and others in El Paso for the incident.

“We want to make one thing as clear as crystal: The Old Plantation Nightclub does NOT support Trump’s views or opinions especially towards our LGBTQ community. The OP was built by and built for the LGBTQ community and everyone should know that,” said Adkins.

Adkins also minimized Alcantar’s stake in the Old Plantation, saying, “While he is a person who invested some of his hard earnings in our vision, with the sole intention of bringing The OP back for its original purpose, he does not represent The Old Plantation, its ownership or our community in any way. This minority partner is an individual with an open mind and an open heart.”

“It’s very easy to forget how to express and show love and respect when politicians, including our own president, are spreading division through their words and policies. We have faith, however, that love will always win,” concluded Adkins.

The club is holding a “Love Rally” tonight to both tie into Valentine’s Day and attempt to do some damage control. It remains to be seen if this will be enough to fix their reputation.

Warner Brothers is casting for a same-sex dating reality show