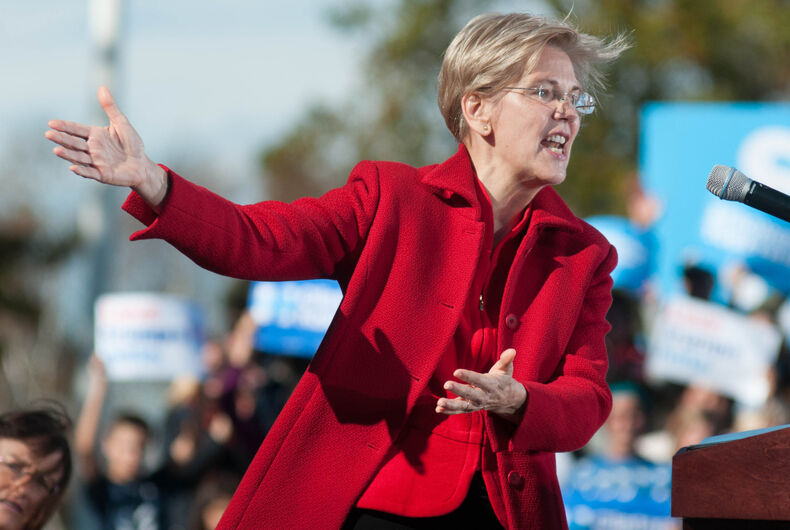 Growing up, most of us hear family origin stories told to us by close relatives.

My grandfather, Shimon Mahler, an immigrant refugees from Poland in 1913 escaping antisemitism and hoping to make a better life for himself, on occasion told me about our relatives in Krosno, Poland and, in particular, his father, Wolf Mahler, after whom I was named.

Shimon’s stories along with a film he took of the family in 1932 instilled in my mind what life (and death) must have been like there. To quench my deep thirst for more information, I have traveled back to Poland on six occasions to dig into my genealogy to uncover the details of my origins. Along the way, I have found many of the missing pieces of the jigsaw puzzle of my life.

During Elizabeth Warren’s childhood, she too heard origin stories from her close relatives. The piece that seemed to have stood out most prominently was that of her mother who expressed that she had some Native American heritage. Though the details were rather unclear and only recently investigated further, she nonetheless incorporated this information into her overall self-definition.

Under constant scrutiny by the press and public in advance of her expected run for the 2020 Democratic Party’s presidential nominee, she underwent a highly visible DNA test hopefully to put the expanding controversy centering on her ethnicity to rest.

While she identified as “American Indian” on her card for the State Bar of Texas, the Washington Post found:

“There’s no indication Warren had anything to gain by reporting herself as Native American on the Texas bar card. Above the lines for race, national origin and handicap status, the card says, ‘The following information is for statistical purposes only and will not be disclosed to any person or organization without the express written consent of the attorney.’”

Since her test, Senator Warren has apologized to her constituents and privately to members of the Cherokee Nation. She stated that she never used her ethnicity to advance financially or professionally.

Warren announced her candidacy last weekend, but controversy still swirls. Many in the Republican Party have piled on Warren’s ethnicity claims, but where is their righteous indignation against the blatant racism tweeted from the Oval Office?

Flanked by surviving Navajo war veterans in a White House ceremony to honor them, President Trump lacked any sense of decency and respect by again taunting his nemesis, Senator Elizabeth Warren, with a racial epithet, “Pocahontas,” referring to her Native American heritage.

He did this while standing beneath a portrait of Trump’s acknowledged “favorite” president, Andrew Jackson, who is infamously known to have committed genocide on native peoples and for initiating the “Trail of Tears.”

Soon after Warren’s Lawrence, Massachusetts rally to announce her campaign for President, Trump tweeted, “Today Elizabeth Warren, sometimes referred to by me as Pocahontas, joined the race for President. Will she run as our first Native American presidential candidate, or has she decided that after 32 years, this is not playing so well anymore? See you on the campaign TRAIL, Liz!”

Today Elizabeth Warren, sometimes referred to by me as Pocahontas, joined the race for President. Will she run as our first Native American presidential candidate, or has she decided that after 32 years, this is not playing so well anymore? See you on the campaign TRAIL, Liz!

The ”TRAIL” is a clear reference to Andrew Jackson’s “Trail of Tears” on which an estimated 4,000 members of the Cherokee Nation died after the U.S. government forced them off their land between 1838-1839.

CNN’s Jake Tapper questioned House Republican Conference Chairwoman Liz Cheney twice for her thoughts on the controversy, asking “What about the language the President uses and the joking references to genocide against Native Americans?” Cheney refused to answer the question.

Instead, she gave a full-throated condemnation of Warren stating, “Elizabeth Warren has made herself a laughingstock, and I don’t think anybody should be surprised that’s been the reaction to her.”

And where has been the Republican Party’s righteous indignation against the blatant and divisive anti-indigenous racism coming from the National Football League and other sports franchises?

According to a October 16, 2013 press release by the American Indian Movement (AIM) Twin Cities calling for a protest at the game between the Minnesota Vikings and the Washington “Redskins,” “The continued use of American Indian likenesses and images by sports teams has resulted in widespread racial, cultural and spiritual stereotyping which promotes hatred and disrespect of American Indian people.”

“Using American Indian slurs like ‘Redskins’ is no different than the use of Black Sambo which offended African Americans or the Frito Bandito which is offensive to the Hispanic community.”

The press release went on to demand, “Retire the racist attire! Recognize that American Indians are a living people, not mascots for America’s fun and games!”

So yes, Elizabeth Warren was overly enthusiastic to embrace an ethnicity without undertaking sufficient investigation. But by all indications, this was the degree of her regretful judgment since there is no evidence of any personal gain or advancement.

On the other hand, the real insult, the real anti-indigenous racism has come directly from the White House and by the utter silence of most Republican “leaders” who further racism by omission.