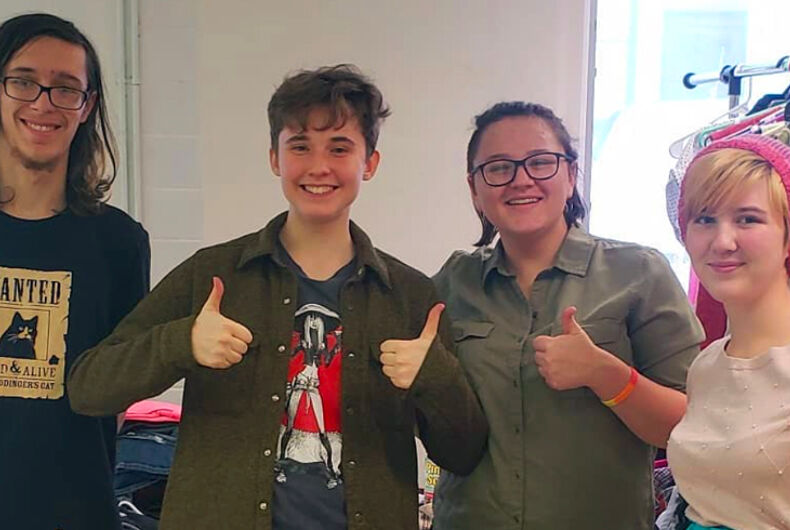 Nick Johnson, a 16-year-old student at a charter school in Indiana, overheard another trans masculine student at their school complain about their lack of male clothing.

Thinking about his own issues finding appropriate clothes in his middle school days – and assuming other students were facing a similar lack of access – spurred him to come up with a solution: a safe place for those seeking clothes that match their gender identity

Johnson reached out to another student, and they hatched a plan: the Rainbow Jacket Project.

“My friend Emme Lang was on board with the idea immediately, and we both planned to start up a clothing bank as a school project the next year,” Johnson told LGBTQ Nation. “We are both International Baccalaureate students at Signature School in Evansville, so the project actually counts as credit towards our diploma.”

“Even if it didn’t, though, we would still do it, because it’s something that means a lot to both of us,” Johnson added.

Related: Watch shoppers come to the rescue of a trans woman being disrespected in a clothing store

Getting clothing can still be a challenge for those who may be exploring their gender. Some may lack adequate funds or may feel uncomfortable shopping in a different gendered section from how they are currently presenting. The goal is to provide a space where people can feel safe and comfortable building a wardrobe.

To house the Rainbow Jacket Project, Johnson and Lang reached out to an unlikely source: St. Paul’s Episcopal Church, asking if they would be willing to provide a space.

“I contacted St. Paul’s about being allowed to use extra space, because it’s downtown and close to our school, so we could walk there,” said Johnson. “They agreed — we aren’t religiously affiliated; we’re just using the church’s space.”

As word has spread, so have the number of donations coming into the project.

“At first we collected stuff from friends and family,” said Johnson. “As word spread about the project, we got many more donations coming in. The marching band at Castle High School did a clothing drive for us where they all played tag and brought in clothes.

“In the past few weeks we’ve been receiving tons of donations from people in the community who have seen us on the news, in the paper, or on social media and who want to help our cause.”

“It’s wonderful to see how the community is coming together to support us,” added Johnson.

The Rainbow Jacket Project just held its opening day, which featured a steady stream of people both picking out attire for themselves as well as people dropping off donations.

“It was really satisfying to see how our hard work has paid off,” Johnson said.

The project has become so big, in fact, that they’re having to ask that donations be dropped off only during their operating hours, and are seeking additional adult volunteers to assist with the project.

The project is now in discussions with Queer Spaces, another local group, about being able to access their 501c3, which would allow the Rainbow Jacket Project to receive monetary donations and seek grant money.

You can learn more about the Rainbow Jacket Project, and how you can help, on their website.

We had a rad time putting all our clothes together! We're almost done– thanks to everyone for help and donations! #rainbowjacketproject #lgbtq #evansville

Opening day was a success! Thank you everyone for all the wonderful support! Our goal was to bring a community together, and it seems that’s exactly what’s happening. We’ll post with our next dates soon, so keep your eyes out!

Will Kansas be the next state to ban anti-LGBTQ discrimination? It’s possible.