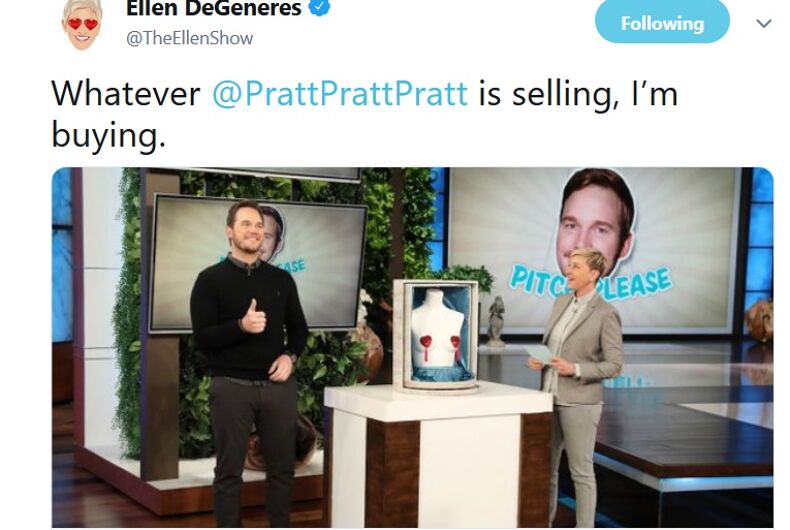 Fans are outraged Ellen Degeneres tweeted support for an actor who is under fire for attending an anti-LGBTQ church. The tweets didn’t mention the actor’s religious beliefs and was a promo for an episode of her show where he was a guest.

Last week, Ellen Page pointed out that Chris Pratt – who loves to talk about how great his church is and promote his Christianity – goes to a church that’s famously anti-LGBTQ.

Pratt attends the Hillsong Church, a church that several other stars attend because it’s hip and has a world famous choir.

But the church also say that it does “not affirm a gay lifestyle” and refuses to hire LGBTQ people. The church also has a history of supporting conversion therapy and gay congregants have come out to denounce the church’s hateful teachings.

Pratt was on The Ellen Degeneres Show on Monday, where he did not talk about any of this, perhaps because the show was recorded before Page tweeted about Pratt’s church.

Instead, he talked about theme parks and played a game with Degeneres.

Yesterday, Degeneres sent several tweets promoting the segments with Pratt. Like this one, where she wrote, “Whatever @PrattPrattPratt is selling, I’m buying.”

I want to ride every theme park ride with @PrattPrattPratt. pic.twitter.com/Y7j5YEOSAu

Another tweet said, “I want to ride every theme park ride with @PrattPrattPratt.”

I want to ride every theme park ride with @PrattPrattPratt. pic.twitter.com/Y7j5YEOSAu

Ellen, you keep trying to rehabilitate these people who don’t respect your own community. And you don’t seem to notice or care that it’s painful for a lot of us to see you just excuse this. Please listen to your community.

Ellen and Rupaul have gotten so comfortable in the mainstream that they no longer relate to every day queer people. They’ve taken on the role of the token lgbtq person on tv and don’t want to make any waves.

I hope he's not selling anything from his church, 'cause, you know, they don't like us that much lol.

Last month, Degeneres came under fire for forgiving Kevin Hart for several violently homophobic tweets he sent, even though he didn’t even appear contrite.

Pratt defended his church earlier this week, saying that they accepted him and he’s straight and divorced, so clearly they accept LGBTQ people, or something.