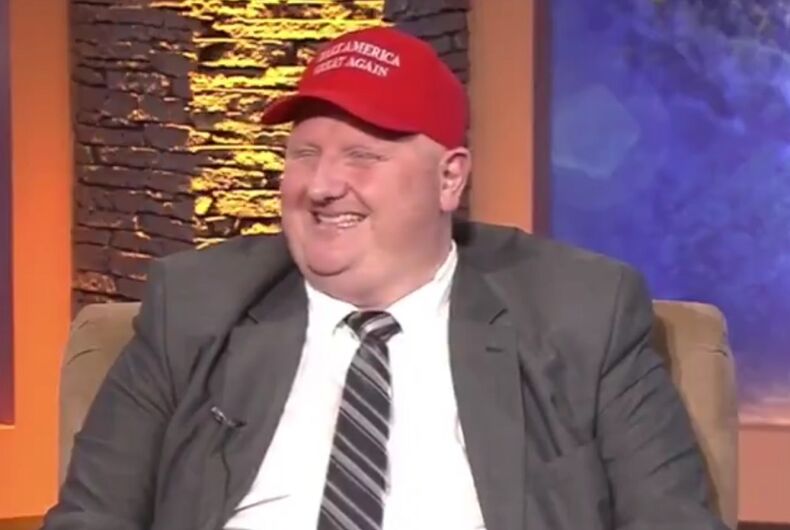 A Republican who said he would drown his kids if they came out as gay now says that he was just baiting liberals.

West Virginia delegate Eric Porterfield has made numerous homophobic comments this past week, like using the word “faggot” at the state legislature, comparing LGBTQ people to the KKK, and saying that LGBTQ people are a “blight on this country.”

Earlier this week, he was asked what he would do if one of his kids came out, and he said, smiling, that he would “see if [they] could swim.”

When asked what he meant, he just repeated himself, grinning at his joke about drowning his own children.

Now he’s saying that he was just trying to upset liberals.

Related: West Virginia gay couple warned to ‘get out of our neighborhood’ because Trump

In a Facebook post, Porterfield said that if his children indulged “in any type of sinful life,” he would “love them, pray for them, fast over them and seek the Lord to watch over them.”

He stressed that he would “definitely not DROWN them.”

“Liberals always take the bait,” he concluded. He ended his post with a smile emoticon, perhaps a reference to how he grinned while saying he would drown his children.

He did not explain why it was appropriate to threaten to kill his own children if they’re gay – something that some parents actually do – just to bait liberals.

“As West Virginians, we are taught to respect one another, love our neighbors, and when we disagree to seek understanding of our fellow Mountaineers,” the party said in a statement posted to Facebook.

“In recent days, Delegate Eric Porterfield has made comments that are hateful, hurtful, and do not reflect the values of our country, our state, and the Republican Party. These comments are unacceptable and we denounce them. They have no place in America.”

The statement did not disavow Porterfield’s policy positions, even though his hateful rhetoric started during a legislative debate on a bill that would have banned cities and counties from passing LGBTQ-inclusive civil rights laws.

Did Ellen forgive Chris Pratt for attending an anti-LGBTQ church?