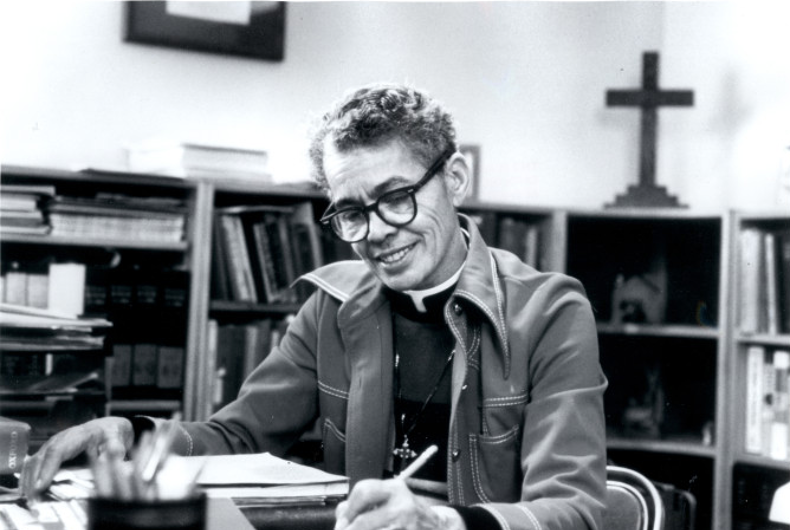 Ruth Bader Ginsburg has emerged as just about everyone’s favorite badass on the Supreme Court. But the notorious RBG stands on the shoulders of civil rights and gender equality champion Pauli Murray.

In a 2015 interview, Ginsburg reflected on one of her key legal accomplishments, the 1971 case Reed vs. Reed. The Supreme Court accepted Ginsburg’s argument in the case that the Equal Protection Clause in the 14th amendment protected against discrimination based on sex.

But the groundwork for Ginsburg’s argument came from Murray.

Murray, a Howard University-trained lawyer, started arguing in the 1960s that the equal protection clause should apply to cases of sex discrimination just as it did to cases of racial discrimination. Murray’s “reasoning from race” used racial analogies to underscore women’s subordinate status, and may even have been a forerunner of today’s language of intersections between categories like race and gender.

Ginsburg named Murray as one of the coauthors of her brief in Reed, even though Murray had no hand in writing it because Murray was a pioneer in crafting legal arguments for fighting sex discrimination.

But who was Pauli Murray? She was many things: an author, a lawyer, an educator, a poet, and a priest. As a woman, a person of color, and a member of the LGBT community, she refused to let her identity be pinned down to any one thing.

Born Anna Pauline Murray in Baltimore, Maryland in 1910, she later changed her name to a more gender neutral Pauli in her 20s. Her grandparents primarily raised Murray in Durham, North Carolina. At age 16, she moved to New York City to attend Hunter College and graduated with a bachelor’s degree in English in 1933.

Murray spent the 1930s documenting her career ambitions and her attraction to very feminine women, which she chronicled in a photo album called The Life and Times of an American Called Pauli Murray.

She chronicled a roving lifestyle and many trips with female companions. Images which she titled “The Dude,” “Mike and Ike,” and “The Vagabond” expressed Murray’s masculine presentation and desire to do things considered contrary to social expectations for women.

Murray had struggled with gender since childhood and considered herself a man trapped in a woman’s body. She read early articles about sexuality and gender in European medical journals, talked with doctors about advances in hormone treatments, and even admitted herself to mental institutions in the 1930s. Doctors refused to prescribe male hormones and suggested she try to conform to feminine expectations.

In 1940, Murray and a friend sat in the whites-only section of a Virginia bus and were arrested for violating the state’s segregation laws. The incident led her to pursue a career as a civil rights lawyer. She enrolled in law school at Howard University, where she also encountered sexism. She called it “Jane Crow,” comparing it to the laws that enforced segregation in the South.

Though she graduated first in her class, Murray was denied an opportunity to do post-graduate work at Harvard University because of her gender. She earned a master’s degree in law from the University of California, Berkeley. In 1965 she became the first African American to receive a Doctor of Juridical Science degree from Yale Law School.

As a lawyer, Murray fought for civil rights and women’s rights. Thurgood Marshall, then chief counsel for the National Association for the Advancement of Colored People, called Murray’s 1950 book “States’ Laws on Race and Color” the “bible of the civil rights movement.” In 1966 she was a co-founder of the National Organization for Women.

Religion played an essential role in Murray’s life. She was baptized as an infant at Baltimore’s St. James’ Episcopal Church, established and led by African Americans, and confirmed at the age of nine. In 1977, at age 62, Murray was ordained the first African-American woman Episcopal priest at the National Cathedral in Washington, D.C.

She offered her first Eucharist in the Chapel of the Cross in Chapel Hill, North Carolina, where her grandmother was baptized as a slave 123 years earlier. She served churches in Washington, D.C., and Baltimore before retiring at age 72.

It’s difficult to know how Murray would identify herself today. She never spoke publicly about her sexual orientation or gender identity but left writings which make clear her struggles with both. In a 1977 sermon, she wrote about a lifelong “quest for spiritual integration,” beyond identities like race and gender.