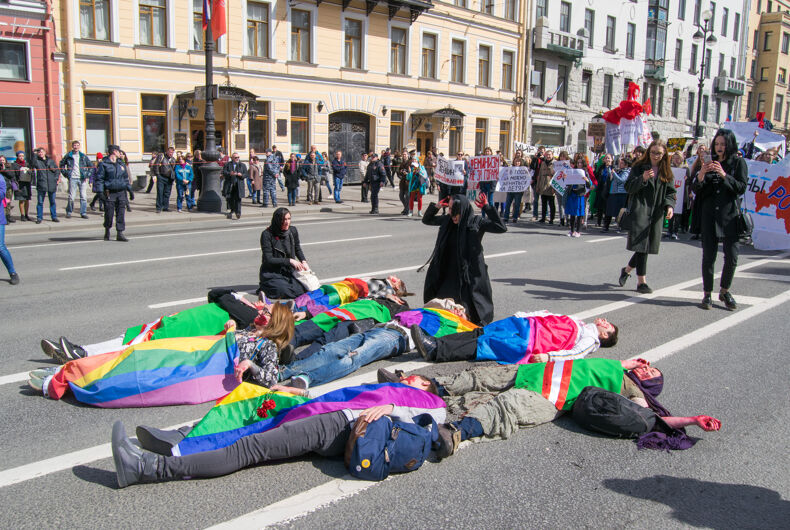 For a brief moment during the past week, it looked like the Trump administration may have actually done something good. In a surprise move, Trump’s ambassador to Germany Richard Grenell announced that he was leading an initiative to decriminalize homosexuality around the world. About 70 countries have laws on the books that make being LGBTQ or having same-sex sexual relations illegal.

The idea sounds as great as it is out of character. It’s also never going to happen. Here are five reasons why the proposed policy initiative is dead in the water before it even starts.

It’s only about Iran. Tellingly, Grenell bolstered his argument for the plan by citing Iran.

“Barbaric public executions are all too common in a country where consensual homosexual relationships are criminalized and punishable by flogging and death,” Grenell wrote in an op-ed. Trump and the right are fixated on Iran and will use every available means to attack it. Attacking Iran is also plays well with Israel’s right-wing government.

But what about other Muslim nations? The administration’s beloved Saudia Arabia regularly arrests people for being gay or even flying a rainbow flag. Or Chechnya, which is under the thumb of Trump’s buddy Putin, and where gay men live in fear of their lives?

It’s easy enough to call out your enemies, but not so easy with your friends. Grenell’s op-ed is a reminder that the right only comes to the defense of LGBTQ victims when it believes that terrorism is involved, like (incorrectly) the Pulse massacre.

The religious right is against it. It takes a lot to get the religious right to criticize Trump, but this plan easily cleared the bar. Grenell said in an interview that evangelicals were in favor of the initiative, but there’s zero evidence that’s true.

In fact, quite the opposite. Tony Perkins, head of the hate group Family Research Council, declared the effort “cultural imperialism.” Suggesting that he’s okay with just jailing LGBTQ people, Perkins argues that while he opposed physical violence, he doesn’t think the U.S. should impose “the values of the sexual revolution on the rest of the world.”

Perkins is hardly alone in his condemnation. Scott Lively, who was among the evangelical leaders behind Uganda’s push to make homosexuality punishable by death, called for Trump to “neutralize” Grenell and end the campaign. (Lively magnanimously conceded that LGBTQ people shouldn’t be executed.) Peter LaBarbera, head of Americans for Truth about Homosexuality, tweeted that “pushing homosexuality & transgenderism on the world is so Obama-esque.”

The administration keeps promoting soft criminalization. The Trump administration has been doing everything in its power to erode LGBTQ protections. It has attacked transgender service members, actively encouraged agencies to discriminate against same-sex adoptive parents and lobbied hard for religious freedom as de facto discrimination.

It’s even sent gay refugees back to countries where they face physical danger, even death. And that’s just a start. Why would an administration with this track record even bother to try something entirely differently overseas?

Grenell doesn’t have the clout. In a normal administration (which this is not, if you’re keeping track), a global initiative of this nature would be rolled out by the Secretary of State or the UN ambassador. That Grenell could seize the lead on this just underscores how chaotic the Trump administration is. Being ambassador to Germany is pretty prestigious, but he doesn’t get to set foreign policy and call the shots for the entire State Department.

Secretary of State Mike Pompeo has his own lengthy record of opposing LGBTQ rights, so it’s hard to see why he would get behind this effort. In fact, the State Department last year held a summit promoting the religious right’s agenda. As for the UN Ambassador—Grenell was apparently angling for that job, but Trump passed him over.

Trump gets nothing out of it. As with so much else in his presidency, Trump doesn’t seem to know what’s going on around him. At a press conference, he made it clear he had no idea that any such plan existed. As with all things connected to the president, the question for him will be, what does he get out of it?

The answer is pretty clear: nothing. Conservative evangelicals are the core of Trump’s base, and he’s doing everything possible to make them happy. Why should he anger them? Moreover, it’s not like progressives or the LGBTQ voters are going to suddenly embrace the president because of this single, shaky effort. Using Trump’s transactional reasoning, why should he bother? All he gets is grief.

As with so much else in the Trump administration, Grenell’s announcement will have little follow through. Oh, perhaps there will be some targeted efforts to punish Iran. But a global initiative? That’s not happening. It’s long overdue, but it’ll have to wait until another administration.