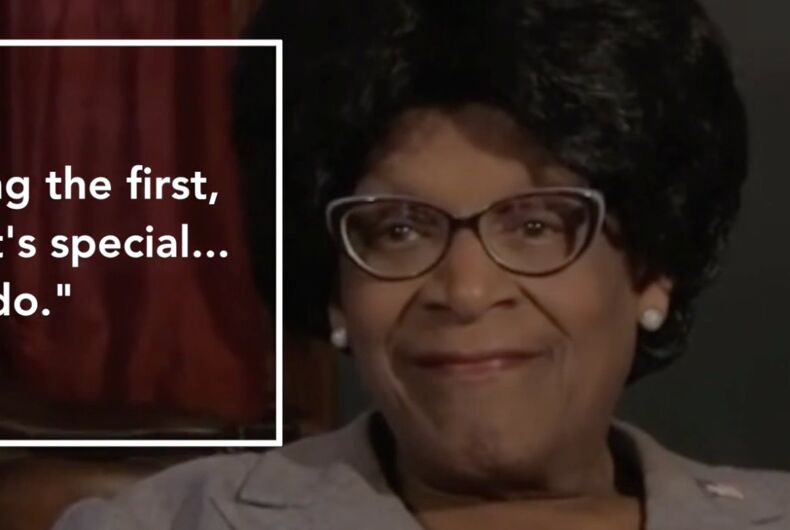 The same night as Roem’s victory, 77-year-old Harvard graduate Althea Garrison quietly lost her 15th election. But Garrison had known success in the past and would taste victory again when she ultimately attained the office she sought for so long.

Despite the significance of Roem’s win, she isn’t the first transgender person to serve in a state legislature. That was Garrison. Decades ago, she was serving in the Massachusetts House of Representatives, when she was outed by the press as transgender, against her will. She spent the next 20 years trying to regain the political footing she lost then.

Born in Georgia, Garrison transitioned in Boston after attending beauty school. In 1992, Garrison — who is African-American — became the first transgender person ever elected to state legislature with her election to the Massachusetts House as a Republican.

Her identity was an open secret in Boston political circles until the Boston Herald ran an article stating that Garrison had “questions about her past life unanswered.”

Related: Four reasons why transgender people are running for office in record numbers

Garrison answered “no” when the Herald reporter asked her if she was ever a man. After all, she never understood herself as male in the truest sense, no matter how the rest of the world classified her.

However, the times being what they were then, the damage was done, and the hatchet job brought an abrupt end to her political career. She served only one term in office.

Garrison, however, never gave up. She’s run for office in almost every election since 1982 — as a Democrat, Republican, and an Independent — getting just seven percent of the vote in her most recent bid for a seat on the Boston City Council.

But when council member Ayanna Pressley won her congressional election, Garrison was next in line to take Pressley’s city council seat as a runner-up in the last election.

“It’s one of my dreams come true,” Garrison says.

Now unaffiliated with any party, 78-year-old Garrison says, “I’m basically a conservative, but I also have some liberal ideas.” Some of her conservative leanings, such as her reluctance to discuss her gender identity, likely stem from coming up at a time when such things weren’t openly discussed.

Some of her past sentiments, like her previous opposition to same-sex marriage, may give some people qualms about her present-day politics, but Garrison doesn’t care what people thought she believed in the past.

As a city council member, Garrison says she will focus on issues like homelessness and services for senior citizens. However, when it’s all said and done, she plans to write a book. She even has a working title: “Althea Did It Her Way.”