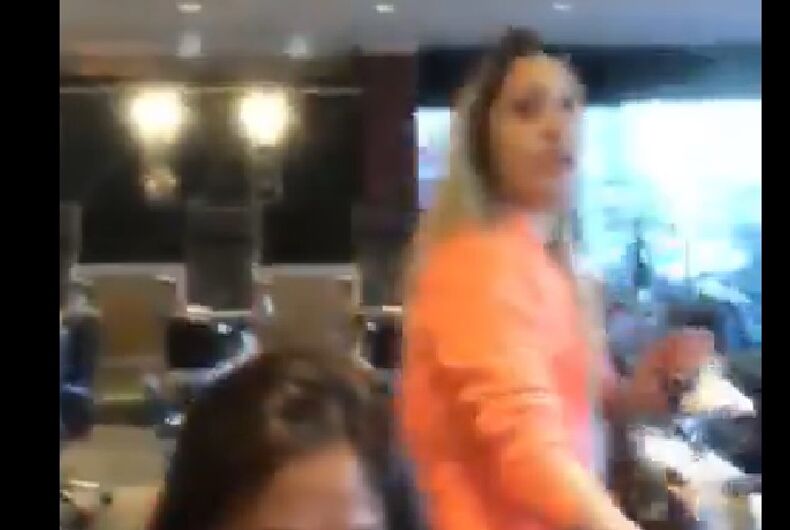 A woman’s homophobic rant at a spa where she calls a gay man a “faggot” and a “sissy” was caught on video.

Christopher Brown said that he was at Casabella Spa & Nails in Lynnwood, Washington, on December 30 for a pedicure when a woman sat next to him and started a loud conversation on speakerphone.

“When I asked her to take her phone off speaker, she looked at me, looked back at her phone call, and then said, ‘Hold on, let me take care of this faggot,’ and then hung up her phone,” he said.

In the video, the woman asks employees to kick Brown out. “It’s either he goes or I go,” she said.

She then calls Brown a “sissy” and says, “You probably wish you had a cunt like me.”

Related: This woman launched into an hour-long homophobic tirade on a plane ride into LA

She called him a “faggot pussy queer fag” as she walked out of the spa.

I’ve been holding back sharing this, but what kind of social justice warrior would I be staying quiet?This situation occurred at my favorite foot spa in Lynnwood, Washington.She enters the spa with commotion, and then proceeds to engage in a speakerphone / FaceTime dialogue with her daughter. The staff are already irritated, as well as the patrons.Being the outspoken gent that I am, I say “mam, would you kindly mind taking your phone off speaker in the spa?”She looks at her FaceTime call and goes “hold on, I need to take care of this faggot”.And at this moment I was able to record:Please take a minute to view and share this, and know that even in the Seattle region, life isn’t always sunshine and rainbows for the lgbt community. I hope her family and friends see this one day, and are embarrassed by her despicable behavior. There is still work to do folks. #resist

Brown said that he was hurt by her tirade.

“I was in complete disbelief and shock,” he said. “It took about a week of not sleeping, a week of anxiety, a week of worrying what would happen if I didn’t act, for me to finally step up.”

“I wouldn’t want to cause any undo harm on her life,” he added. “I would just want her to come to light with what she said, realize that those views are not okay and that you can’t treat people like that.”