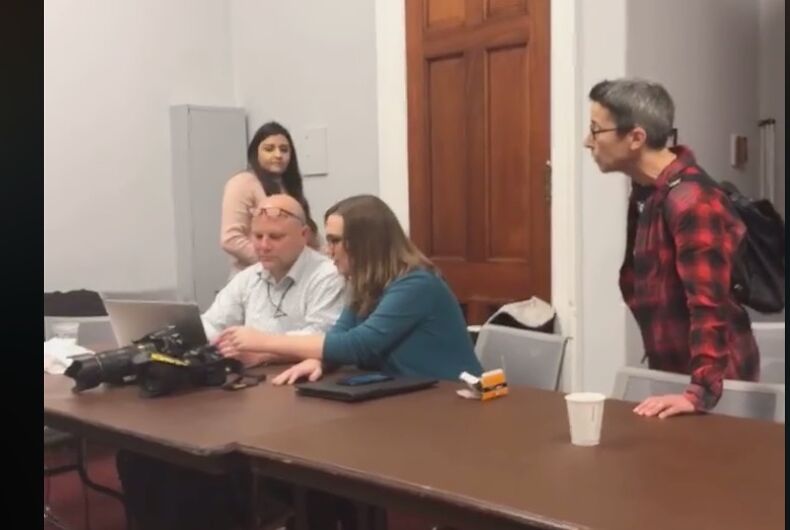 A fringe group of so-called “radical feminists” – including at least one lesbian and a man who said he used to be trans – joined a far right conservative foundation panel this week to bolster the group’s arguments against transgender rights.

Using demeaning language and bogus claims, the “feminists” gave the audience what they paid for – complete bullshit in defense of discrimination. But after the faux feminists left town, things got even uglier.

Shortly after a group of parents with transgender children met with members of Congress and gave eloquent testimony to the group about the struggles their families face, two of the hateful women burst into a meeting to demean and harass Sarah McBride, the National Press Secretary of the Human Rights Campaign.

McBride was the first transgender woman to address the Democratic National Convention.

Posie Parker and Julia Long, a lesbian woman, barged into a private meeting McBride was having after the congressional get-together to demean her and accuse her of harming lesbians. After the stunt, Parker posted video of the verbal assault on social media to crow about their despicable antics.

“This is Sarah McBride,” Parker says at one point, deliberately misgendering McBride, “He gets paid probably quite a lot of money to lobby the government to try and make sure that women and girls have no right to any space anymore.”

The women continually misgender McBride through the attack.

The twisted bigots demand to know why McBride is advocating for the Equality Act, legislation that would outlaw discrimination against LGBTQ people in employment, public accommodations, and housing.

Both women are British and would not be affected by the law. They have a history of anti-trans activism. Parker has been investigated by police for harassing a trans woman.

“I won’t let this incident diminish the love, pride and solidarity that filled that room just moments before,” McBride said in a Facebook post. “The sad truth is that this kind of harassment is the reality for far too many transgender people, particularly trans women of color, across the country and around the world.”

“It is disturbing but not at all surprising that anti-transgender extremists brought to the United States at the behest of the Heritage Foundation would stoop to harassing a transgender woman and parents of transgender youth,” HRC’s Senior Vice President for Communications and Marketing, Olivia Dalton, said in a statement.

“That the targeted harassment occurred following a moving meeting between parents of trans kids and members of Congress reinforces the massive gap between our message of love and their agenda of bigotry. No one advocating for their basic human rights should face such hate and hostility.”

Watch below as the odious pair try to get a rise out of McBride, who reacts calmly and gives them the attention they deserve – none at all.

But also be sure to watch the video of brave parents talking to members of Congress about their families. You’ll need something cleansing after watching the repulsive attack on McBride.

This is what a local government thinks transgender people look like?