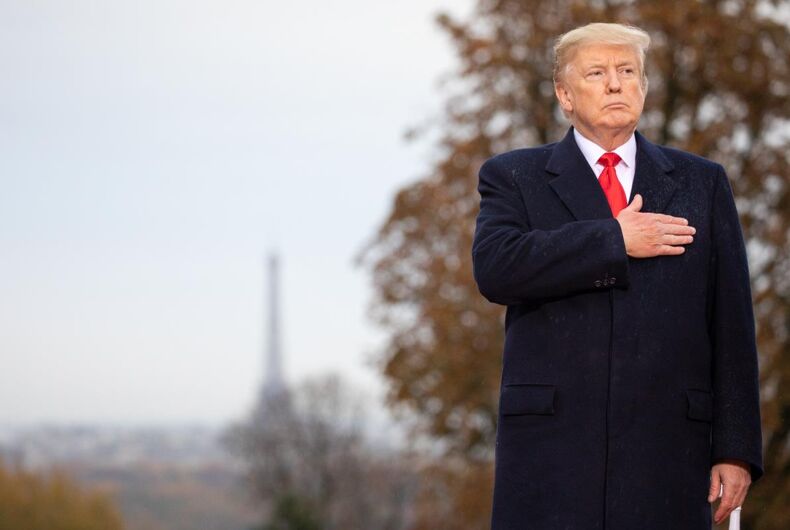 From the presidential campaign through the Brett Kavanaugh hearings, white conservative evangelicals have been the core of President Trump’s base.

Unperturbed by Trump’s history as a liar, serial philanderer and casino operator, the religious right has chosen instead to see in Trump the man who is going to deliver on their dreams, especially the anti-LGBTQ ones.

From Stormy Daniels through the Russian investigation, Trump could always count on his evangelicals supporters to give him, in hate group leader Tony Perkins’ words, a “mulligan” for his actions.

But if a recent poll is any indication, Trump may be running out of mulligans.

According to an NPR/PBS NewsHour/Marist Poll, Trump is beginning to see evangelicals start to turn against him. The survey results, based on more than 1,000 responses from voters earlier this month, shows a significant erosion of support from conservative Christians from just the month before. Trump’s positive/negative ratings shifted 13 points, from 73-to-17 percent approve to 66-to-23 percent approve.

At first glance, the shift raises the question of why so many evangelicals continue to stick with Trump, who is jockeying to replace James Buchanan as the worst president ever. But the survey shows that even Trump’s base has its limits. The events of the month leading up to the poll seem to have proven to be just too much.

And it’s not just evangelicals. White suburban men went from a net positive view of Trump– 51-to-39 percent–to a net-negative of 42 percent approve, 48 percent disapprove.

Even more disturbing for Trump is that among Republicans, 43 percent would like to see someone challenge him in the presidential primaries. That’s an ominous sign for an incumbent president.

Exactly what accounts for the erosion of support is hard to say. But Trump has benefited from a strong economy, and the stock market rollercoaster of the past month is beginning to spook consumers. Of course, Trump’s own erratic policies, including his trade war, has contributed mightily to the wobbly market.

The problem for Trump is that he doesn’t have any margin for error in his re-election effort. He won in 2016 thanks to 80,000 people in three swing states, even though he lost the popular vote by 3 million. With such tight margins, he can’t afford to lose any of his supporters, especially since Democrats are chomping at the bit to vote against him.

One poll is hardly enough to declare Trump a lame duck. But as evidence grows that we may be heading into a recession,  Trump’s chances of re-election will take an even bigger hit.

If Trump can’t hold his base together, he’s a goner. The cracks forming in his core coalition should be a cause of concern for him–and a glimmer of hope for the rest of us.