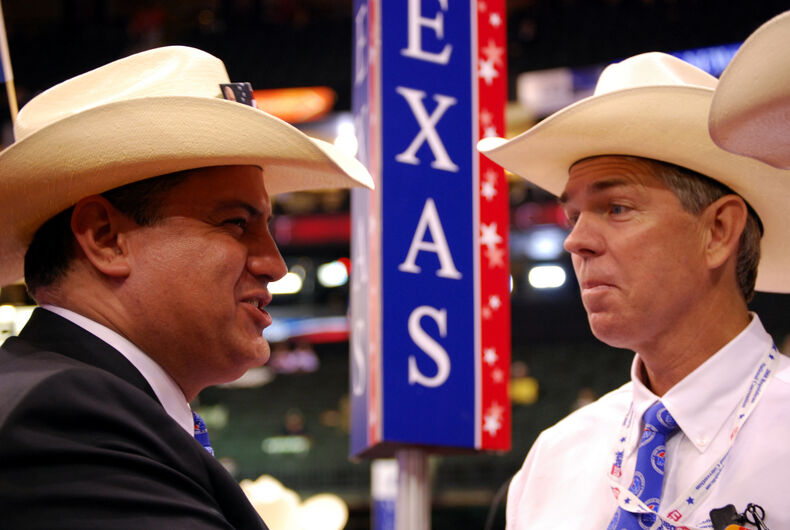 This is the second time Representative Zedler has attempted to pass such a bill: he first introduced a “Free to Believe Act” in 2017, but it failed to pass. In the interim, Texas also failed to pass a hotly contested bathroom bill, leaving many less interested in such proposals.

In that fight, which led to a 30-day special session primarily to pass SB 6, the Texas senate adjourned without passing the bill.

“Voters have had it with the hatefulness. They want lawmakers to focus on the economy and public education, not take aim at LGBTQ Texans’ rights.”

None of this has stopped lawmakers like Zedler from filing his latest version of the Free to Believe Act, now HB 1035.

Related: Why do Texas Republicans refuse to repeal a law that says gay sex is illegal?

HB 1035 would make it illegal for any number of “government entities” — including the state of Texas, its supreme court, or even a private citizen who sues in order to enforce a law enacted by the state — to take any “discriminatory action” against a religious organization or private citizens whose “sincerely held religious beliefs or moral convictions” cause them to discriminate against LGBTQ people.

The two “sincerely held religious beliefs or moral convictions” spelled out in the bill are that marriage should only be between one man and one woman, and that man and woman “refer to an individual’s immutable biological sex determined by anatomy and genetics at the time of birth.”

In short, the bill allows same-sex couples to be denied services over the course of their marriage, as well as cutting transgender people off entirely from goods and services appropriate to their gender.

This would create a loophole to discriminating against LGBTQ people throughout the state, in everything from healthcare to housing. The bill also introduces the same anti-bathroom regulations that SB 6 was seeking.

Zedler is widely seen as one of the most conservative of Texas legislators, and has served as a State Representative since 2003, save for 2009-2011 when Democrat Chris Turner held his seat.

If you eat Arby’s, Applebees, or JIF peanut butter, you’re probably a conservative