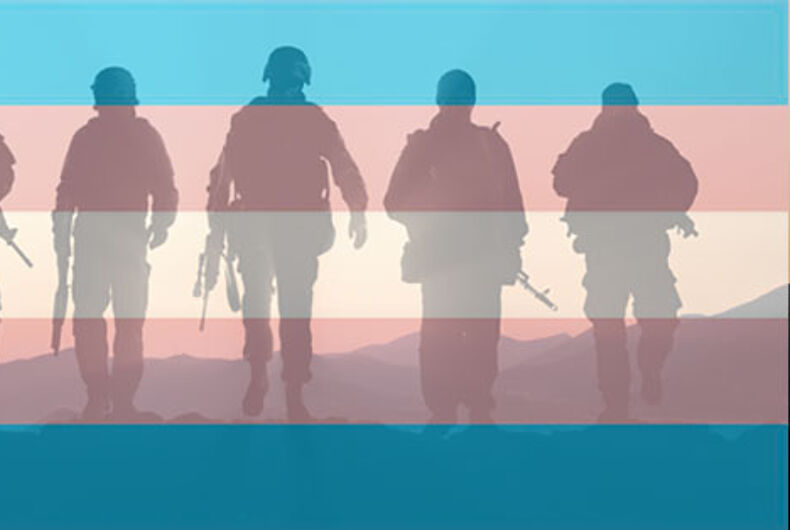 The United States Supreme Court has ruled that President Donald Trump’s arbitrary ban on transgender people from the military may go into effect despite multiple lower court rulings against it.

The decision could have an immediate impact on the thousands of transgender people currently serving their country.

The justices split on the decision, with the four liberal judges voting against lifting the ban.

Trump tweeted his decision to discriminate against trans service members unexpectedly in July 2017, catching military leadership and activists off guard.

This story is breaking and will be updated.

Earlier this month, though, a court of appeals overturned the injunction issued in Doe v. Trump, a case that originated in D.C.

Today, the Supreme Court refused the Trump administration’s request to review the lower courts’ preliminary rulings, but it issued a stay on the other injunctions. This means that the trans military ban can be implemented as the cases work their way through the federal court system.

The White House’s argument was that the injunctions were bad for democracy and were part of a growing trend of lower courts issuing nationwide injunctions while challenges to Trump administration policy.

“It is with great reluctance that we seek such emergency relief in this court,” Soliciter General Noel Francisco wrote. “Unfortunately, this case is part of a growing trend in which federal district courts, at the behest of particular plaintiffs, have issued nationwide injunctions, typically on a preliminary basis, against major policy initiatives.”

“Such injunctions previously were rare, but in recent years they have become routine. In less than two years, federal courts have issued 25 of them, blocking a wide range of significant policies involving national security, national defense, immigration and domestic issues.”

Lawyers for the transgender servicemembers told the court that the current policy is one of open service, and the lack of evidence that the ban will accomplish anything positive means that it should not take immediate effect.

“The government has presented no evidence that their doing so harms military readiness, effectiveness or lethality.”

“In declining to hear these cases, the Supreme Court saw through the administration’s contrived efforts to gin up a national crisis.” said Jennifer Levi of GLAD’s Transgender Rights Project. “The Trump administration’s cruel obsession with ridding our military of dedicated and capable service members because they happen to be transgender defies reason and cannot survive legal review.”

“Our country owes a debt of gratitude to the thousands of transgender people serving in our armed forces,” said NCLR Legal Director Shannon Minter.

“We are confident the courts will ultimately protect the integrity of our nation’s military and hold that transgender service members must be evaluated based on the same standards applied to all others, not barred from service based on a characteristic that has no relevance to their fitness to serve.”

“For more than 30 months, transgender troops have been serving our country openly with valor and distinction, but now the rug has been ripped out from under them, once again,” said Peter Renn of Lambda Legal.

“We will redouble our efforts to send this discriminatory ban to the trash heap of history where it belongs.”

Alex Bollinger contributed to this article.