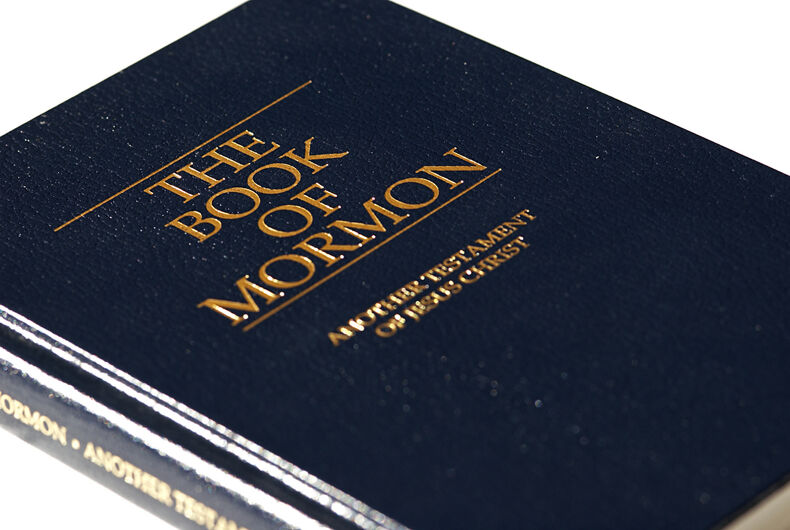 “To a great degree, a presidency shapes the public character of the nation,” Romney wrote. “A president should unite us and inspire us to follow ‘our better angels.’… With the nation so divided, resentful and angry, presidential leadership in qualities of character is indispensable. And it is in this province where the incumbent’s shortfall has been most glaring.”

During Trump’s march to the White House, Romney entered the camp of the “never Trumpers.” He then referred to Trump as “a phony, a fraud. His promises are as worthless as a degree from Trump University….[D]ishonesty is Donald Trump’s hallmark, [with his] bullying, the greed, the showing off, the misogyny, the absurd third-grade theatrics.”

Since Romney’s election to the U.S. Senate, political pundits have speculated on the role he will play in Republican Party politics. While few Congressional Republicans have criticized Trump’s character publicly, a few like Senators Jeff Flake and Bob Corker did after announcing their intended retirement.

Romney seems to have changed the equation by taking on Trump on his way into Congress. Others have complained privately about Trump fearing that a public display would most likely place them in Trump’s Twitter crosshairs and set them up for a possible primary challenge.

Romney, though, has no real concerns about a serious challenge if he decides to seek a second term since Trump has low marks even in the deep red state of Utah.

Romney does, however, support many of Trump’s policy agenda items such as the limited role of government and abolition of the ACA, sometimes called “Obamacare,” which, incidentally was patterned on the state healthcare system Romney championed as Massachusetts governor.

During his run in the 2012 presidential race, Romney argued, “I hope people understand this, your friends who like Obamacare, you remind them of this: if they want more stuff from government tell them to go vote for the other guy – more free stuff.”

Some pundits have speculated that Romney’s Mormon faith compels him, though, to raise Trump’s issues of character and morality, as it has other Mormon politicians like former three-term Senator, Bob Bennett, also from Utah.

In Romney Washington Post op-ed, he stated, “I do not intend to comment on every tweet or fault. But I will speak out against significant statements or actions that are divisive, racist, sexist, anti-immigrant, dishonest or destructive to democratic institutions.”

But does Romney and Bennett’s Mormonism give them a moral upper hand criticize Trump’s morality and character?

A petition circulated after the election asked that the Mormon Tabernacle Choir not perform as scheduled at Donald Trump’s inauguration. The petition read in part, “We, as signers of this petition, believe that The Church of Jesus Christ of Latter-day Saints’ decision to allow the Mormon Tabernacle Choir to perform at the upcoming presidential inauguration of Donald Trump DOES NOT reflect the values of Mormonism and does not represent its diverse 15+ million members worldwide.”

But Trump and the values of Mormonism do, in fact, align. Since its very founding, The Church of Jesus Christ of Latter-day Saints has perpetuated numerous forms of oppression, most notably sexism, heterosexism, racism, and anti-Jewish oppression.

“Men are called as high priests because of their exceeding faith and good works — They are to teach the commandments — Through righteousness they are sanctified and enter into the rest of the Lord — Melchizedek was one of these — Angels are declaring glad tidings throughout the land — They will declare the actual coming of Christ. About 82 B.C.” Chapter 13, Book of Alma in The Book of Mormon

The Bishops Council of LDS (an all-male assembly) recently excommunicated life-long committed member in absentia, Kate Kelly, on the charge of “apostasy” for “conduct contrary to the laws and order of the church.”

The “conduct” to which the Bishops refer amounts to Kelly’s lobbying efforts for the Church to change its policies and finally allow women’s ordination. Kelly serves as a lawyer and she cofounded the website OrdainWomen.org as a forum to raise issues and provide discussion on this crucial topic.

According to the website, “Ordain Women aspires to create a space for Mormons to articulate issues of gender inequality they may be hesitant to raise alone. As a group we intend to put ourselves in the public eye and call attention to the need for the ordination of Mormon women to the priesthood.”

The Bishops told Kelly in an email message that she could gain reinstatement after one year if she exhibited “true repentance” and relinquished her activism for women’s ordination. Kelly, however, claiming she “did nothing wrong,” vowed not to give up her fight, and though she does not have hope for a reversal, plans to appeal the decision.

“Homosexual behavior violates the commandments of God, is contrary to the purposes of human sexuality, distorts loving relationships, and deprives people of the blessings that can be found in family life and in the saving ordinances of the gospel. Those who persist in such behavior or who influence others to do so are subject to Church discipline. Homosexual behavior can be forgiven through sincere repentance.” -The Handbook of Instructions, The Church of Jesus Christ of Latter-day Saints

These words supposedly expressed God’s revelation to the leadership of LDS and reaffirmed in 1995 when the First Presidency and the Quorum of the Twelve Apostles entered the debate on the parameters of marriage by issuing “The Family: A Proclamation to the World.”

It stated in part, “We, the First Presidency and the Council of the Twelve Apostles of The Church of Jesus Christ of Latter-day Saints, solemnly proclaim that marriage between a man and a woman is ordained of God and that the family is central to the Creator’s plan for the eternal destiny of His Children” and claiming that the power to create children “is not an incidental part of the plan of happiness. It is the key – the very key….This commandment has never been rescinded.”

Leaders and members of the Church, therefore, justified contributing an estimated $20 million to the 2008 California Ballot 8 initiative campaign, which succeeded in limiting the rights and benefits of marriage to one man and one woman.

If the Church’s position on same-sex attractions, expression, and marriage for same-sex couples was not clear enough, LDS President of the Quorum of Twelve Apostles, Boyd K. Packer, referred to homosexuality throughout a sharply worded sermon as “wrong,” “wicked,” “impure,” “unnatural,” “immoral,” “against nature,” “evil,” and a threat to civilization.

Packer’s sermon was delivered to the more than 20,000 participants in the LDS Conference Center in Salt Lake City and millions more watching on satellite television at the Church’s 180th Semiannual General Conference in October 2010.

“We teach a standard of moral conduct that will protect us from Satan’s many substitutes or counterfeits for marriage. We must understand that any persuasion to enter into any relationship that is not in harmony with the principles of the gospel must be wrong. From the Book of Mormon we learn that ‘wickedness never was happiness’,” he said.

“There are those today who not only tolerate but advocate voting to change laws that would legalize immorality, as if a vote would somehow alter the designs of God’s laws and nature. A law against nature would be impossible to enforce… To legalize that which is basically wrong or evil will not prevent the pain and penalties that will follow as surely as night follows day… If we do not protect and foster the family, civilization and our liberties must perish.”

The LDS “revelation” on sexuality and gender expression has, indeed, hurt and damaged real people, but looking back historically, other LDS “revelations” have also negatively affected people while damaging the Church’s reputation.

Then LDS president, Brigham Young, instituted a policy on February 13, 1849, emanating from “divine revelation” (and continuing until as recently as 1978) forbidding ordination of black men of African descent from the ranks of LDS priesthood.

In addition, this policy prohibited black men and women of African descent from participating in the temple Endowment and Sealings, which the Church demands as essential for the highest degree of salvation. The policy likewise restricted black people from attending or participating in temple marriages.

Young attributed this restriction to the sin of Cain, Adam and Eve’s eldest son, who killed his brother Abel: “What chance is there for the redemption of the Negro?,” stated Young in 1849 following declaration of his restrictive policy. “The Lord had cursed Cain’s seed with blackness and prohibited them the Priesthood.”

While making a speech to the Utah Territorial Legislature in 1852, Young further asserted: “Any man having one drop of the seed of [Cain]…in him cannot hold the Priesthood, and if no other Prophet ever spoke it before, I will say it now in the name of Jesus Christ I know it is true and others know it.”

In another instance, Young said, “You see some classes of the human family that are black, uncouth, uncomely, disagreeable and low in their habits, wild, and seemingly deprived of nearly all the blessings of the intelligence that is generally bestowed upon mankind.”

“Cain slew his brother. Cain might have been killed, and that would have put a termination to that line of human beings. That was not to be, and the Lord put a mark upon him, which is the flat nose and black skin…that they should be the ‘servant of servants’; and they will be, until that curse is removed.”

Joseph Fielding Smith, Tenth Prophet and President of the LDS Church wrote in 1935 that, “Not only was Cain called upon to suffer, but because of his wickedness, he became the father of an inferior race. A curse was placed upon him and that curse has been continued through his lineage and must do so while time endures….”

It seems that the Twelfth LDS Church president, Spencer W. Kimball, who served from 1973 to his death in 1985, was touched with such a “vision” and, therefore, reversed the ban, referring to it as “the long-promised day.”

We can ask today whether “revelation” or pragmatism was the determining factor in permitting black people full membership rights in the Church at a time of ongoing and heightened civil rights activities in the United States and an increase in LDS missionary recruiting efforts throughout the African continent.

We can also which was the motivating consideration for abandoning its promotion of polygamous marriages at a time when the United States Congress demanded this as a condition for the admission of Utah as a state within the United States.

Reports came to light in 1995 that LDS was secretly inflicting forced and unwarranted posthumous “baptisms” onto Jewish Holocaust victims. After the practice surfaced, LDS promised to discontinue these ritual baptisms, but reneged.

LDS disclosed in 2011 it had “baptized” Daniel Pearl, a Jewish reporter for the Wall Street Journal whom terrorists kidnapped and killed in Pakistan in 2002 and also Holocaust victim Anne Frank, whom LDS baptized in 2012.

So, while we can applaud Mitt Romney for breaking ranks with most other Republican politicians by consistently condemning Donald Trump’s character and morality, he stands on a foundation of deep quicksand if he or anyone does so based on his Mormon background.