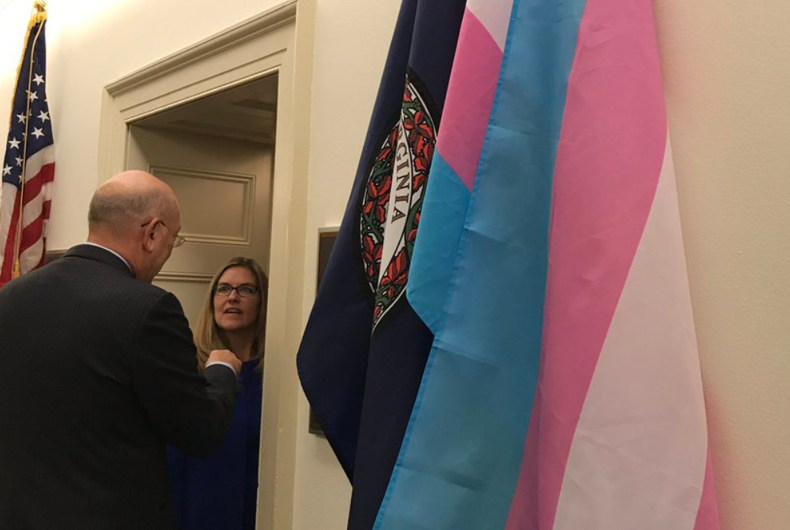 Democratic Virginia Congresswoman Jennifer Wexton is starting off her term on the right foot. One of her first orders of business was to hang a trans flag outsider her office door.

Wexton, who is the aunt of a transgender child, is the first Congressperson to hang the flag.

“The trans community has been under attack,” Wexton told the Washingtonian. “I wanted to show my solidarity because we are talking about my friends and family.”

The freshman legislator was endorsed by the Human Rights Campaign. She defeated incumbent Barbara Comstock who had a mixed record on LGBTQ issues. While generally unsupportive, she voted against an amendment that would have banned transgender people from the military.

“Congresswoman Comstock’s vote on this issue reflected her view that [Defense] Secretary [Jim] Mattis, and the professionals at the Defense Department are best equipped to define these policies,” her spokesman, Jeff Marschner, said in a statement at the time. “The congresswoman trusts that Secretary Mattis will provide the clarity and details on what is in the best interest of military readiness going forward.”

President Trump later tweeted his unilateral decision to ban trans people from military service. Secretary Mattis later testified that that none of the four military services’ top generals nor the chairman of the Joint Chiefs of Staff were consulted before Trump randomly announced his decision on social media.

“From the military to schools to hospitals, the Trump-Pence White House is working overtime in an attempt to erase trans people from the public square,” Human Rights Campaign spokesperson Charlotte Clymer said.

“The trans flag proudly on display in the Halls of Congress is a sign to our community that we will not be erased.”

The trans flag is proudly & openly displayed next to the Virginia flag outside @RepWexton’s new office! She said to me, “Did you see the flag?! I think we’re the only office on the Hill with one.” To all her volunteers: the flag is there because of you & for you! Change is here! pic.twitter.com/s0iGgoxOgH

Olivia Newton-John wants you to know she isn’t dead