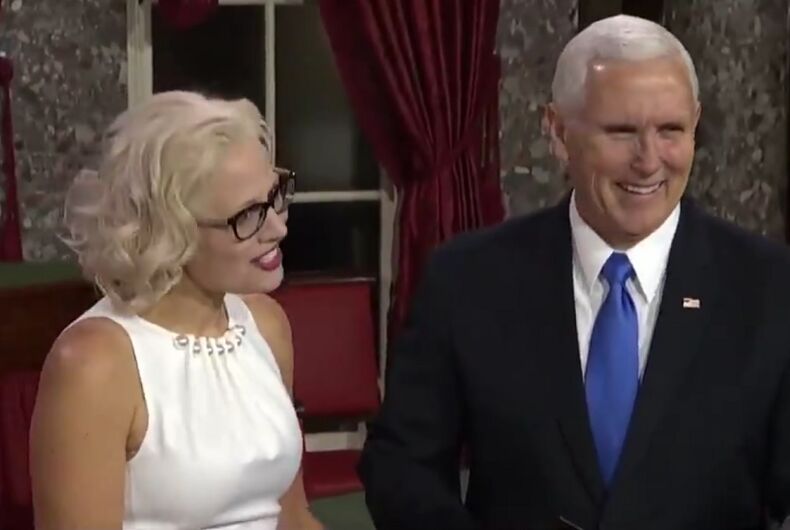 Mike Pence, who is known for his extreme Christian conservatism, had to swear in America’s first bisexual U.S. Senator… with a copy of a law book.

Kyrsten Sinema (D-AZ) was sworn in to the Senate yesterday. Afterwards, senators got ceremonially sworn in again with Pence, which is a moment for pictures and the press.

As Pence helped Sinema get into position, she noticed the marking on the floor that said “spouse.”

“Can we get a spouse?” Sinema joked. She is divorced.

Not only was it ironic that someone whose anti-LGBTQ views once even included support for federal funding for conversion therapy had to swear in the country’s first bi U.S. Senator, but Sinema was one of the few members of Congress sworn in on something other than a religious book.

Instead, she was sworn in on a book that contained both the U.S. and the Arizona constitutions.

“Kyrsten always gets sworn in on a Constitution simply because of her love for the Constitution,” said a spokesperson for the senator.

According to the Pew Research Center for Religion and Public Life, Sinema is the only member of Congress who identifies as “religiously unaffiliated.”