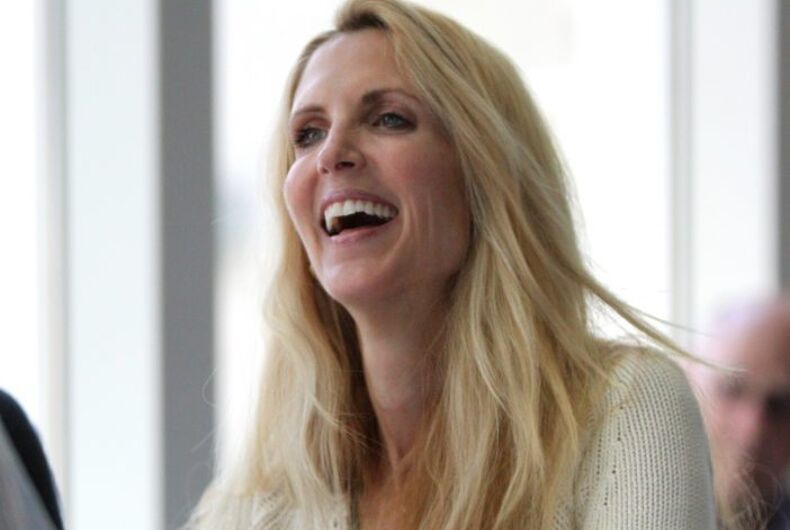 A hate group is trying to get Ann Coulter to run for president.

Late last week, the government shutdown over a border wall between the U.S. and Mexico came to an end when Donald Trump agreed to sign a spending bill to open the government for the next three weeks, walking away from the 35-day standoff without any concessions from Democrats on the border wall.

Coulter was among the first conservatives to denounce the decision to re-open the government, calling Trump a “wimp.”

Good news for George Herbert Walker Bush: As of today, he is no longer the biggest wimp ever to serve as President of the United States.

“I hope Ann Coulter will give serious consideration to running against Trump in the primary and run on a MAGA platform offering conservative voters a pledge to keep her promises… unlike Trump!” said ALIPAC president William Gheen.

Coulter was one of the first prominent conservatives to endorse Trump’s presidential campaign in 2015 and one of his most rabid supporters. She referred to Trump as America’s “emperor god” and even wrote a book entitled In Trump We Trust.

Now she is one of his biggest critics on the right.

“He promised something for 18 months, and he lied about it,” she said on Bill Maher’s HBO show this past Friday.

When Maher asked her about her earlier support for Trump, she said, “Okay, I’m a very stupid girl, fine.”

The Washington Times asked Coulter about ALIPAC’s campaign to draft her, and she said that it was an “honor” to be named by “such a patriotic and important organization.”

“But unfortunately, I’m against women working,” she said.

Coulter has a long history of anti-LGBTQ comments. In 2007, she referred to Democratic presidential primary candidate John Edwards as a “faggot.” She has also called Bill Clinton gay.

In 2017, she said that it was more likely that Houston electing a lesbian mayor was a more likely cause of a hurricane than climate change.

As late as 2011, Coulter was supporting conversion therapy and in 2012 she was joking about parents disowning their gay kids.

Gay Republicans like her, though. In 2011 she was named “Honorary Chair” of GOProud’s Advisory Council. The gay Republican organization referred to her as a “gay icon” in a statement.