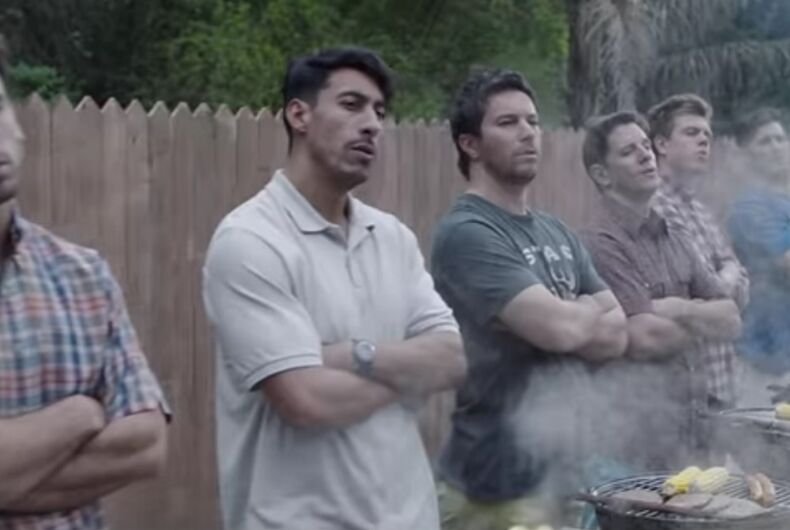 Gillette – the razor company whose slogan is “The best a man can get” – released an ad about toxic masculinity.

The ad shows several scenes of men and boys doing sexist and violent things, like pinching a woman’s butt, repeating what a woman said in a corporate meeting, fighting, and bullying another boy.

“Is this the best a man can get?” the powerful ad asks, imploring men to hold each other accountable for better behavior.

Expecting them to not do things that we all generally agree are bad shouldn’t be too controversial. But this is Trump’s America now.

But the ad was calling out a culture that teaches boys and men to do those bad things. And the purveyors of that culture get mad when someone calls them out.

*NEW: Let's be clear: @gillette now wants every man to take one of their razors & cut off his testicles.
My new column: https://t.co/oxerBI37av pic.twitter.com/UjgrzVXaUb

Morgan, who has a long history of sexist, homophobic, and transphobic comments, claimed in his Daily Mail column that he spent $150 on Gillette products the day before he saw the ad.

And not because he likes them, but “because I like Gillette’s brand and what I thought it stood for.” But now he’s going to, presumably, stop spending that money on Gillette products because they told him not to harass women.

He later claimed on Twitter that he spends $1000 a year on Gillette products.

I spend $1000s a year on @Gillette products. They need me, just as they need all their male customers they just threw under the PC bus. https://t.co/QryHSh0YEs

Fox Business host Charles Payne called the ad “virtue signaling,” which is an expression that conservatives now use to dismiss anyone who tries to be a decent person, because they believe that all people are horrible and no one could possibly be against something like, say, sexual violence.

In 2017, Payne was accused of sexually harassing and raping a woman in a lawsuit against Fox. Payne denies the claim.

But maybe that explains why he believes that men actually can’t better, since he himself cannot.

Anti-feminist blogger Matt Walsh also didn’t like the ad, and he tweeted a joke about how ridiculous the ad is since bullying is never sanctioned by adults, and boys never cheer on their friends when they bully someone, which would come as a surprise to a lot of bullies out there.

Today I was walking down the street when I noticed a bunch of boys bullying another kid. Of course I stopped and cheered them on and shouted, "Yeah! Bully that kid! Bullying is the best!" But then someone showed me that Gillette ad and I realize now that I was wrong.

Some conservatives didn’t get the memo that the problem with the ad is that it assumes that men are doing the behavior shown in it, and instead wrote that Gillette isn’t for real men… because real men actually do all those things shown in the ad?

@Gillette I have an idea for your new marketing campaign. pic.twitter.com/wT9njb0zSO

There are lots of people who understood the point of the ad, though, and asked, if we all really agree that bullying and sexual harassment are wrong, then what’s the problem?

Am I watching a different Gillette ad than everyone who’s mad about it…? I don’t understand why people are angry about a message to be the best man you can be by stepping in to stop bullying, being supportive fathers, & calling out bad behavior instead of looking the other way.

That Gillette ad doesn’t wage war on men, it simply challenges men not to bully, catcall, grope or assault anybody. How is that controversial? Interesting to see conservatives, who weaponized Al Franken and Harvey Weinstein for political purposes, feign outrage over this message.

Others commented on what it says when you get mad that someone told you not to bully or harass people.

This person summed up the controversy.