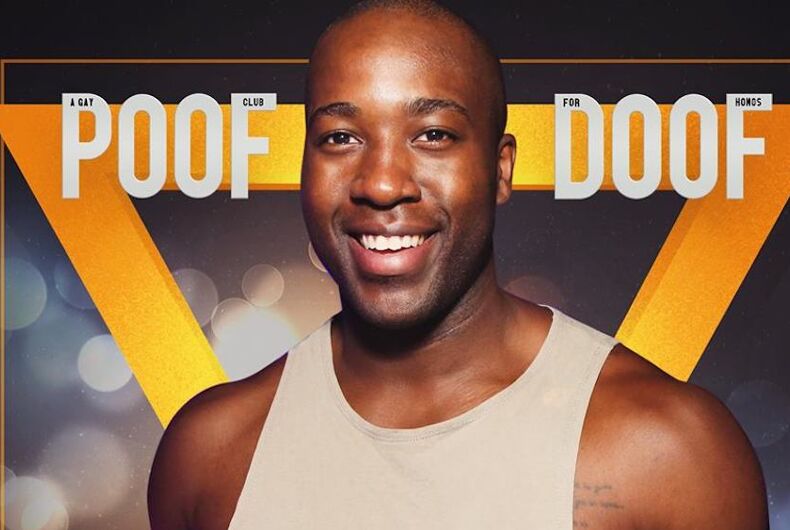 Photos are only to be taken of Boys. Poof Door is a gay club for homos. No one is here to see girls. Ever. Boys with big muscles. Big ones. The kind of muscles that come about from spending at least 5 sessions a week at the gym. Hot boys… Only the best [drag queens]. And never more than 3 to 4. And once they’ve been had their photo taken once, that’s it. Forever.

And on their list of who not to take photos of, the bar wrote:

Skinny boys… They are a dime a dozen. There is nothing interesting nor cool about them. Boys with bad skin. Messy boys. Anyone who looks like they’ve poked down a 10-pack is OUT. Indi boys… unless they are BREATHTAKINGLY good looking or especially stylish.

It’s unclear if Indi boys here refers to Indian boys or something else.

Here’s an image of the brief:

The brief isn’t particularly shocking in that many gay bars use muscular men in their advertising. While such images may generate business, they also perpetuate body dysmorphia with the idea that there’s only one ideal kind of attractive person and do nothing to unite gay men with women and non-binary performers.

While the bar may not have considered drag queens or skinny boys worth photographing, both undoubtedly spent money and invested time into the bar, making Poof Doof seem unappreciative of their contributions.

What’s most surprising in this incident is the LGBTQ community’s disappointment over the brief’s discriminatory view of who is worth photographing.

Susie Robinson, General Manager of Poof Doof, claimed the brief was issued several years back and hasn’t been used since. She also claimed that it was recently leaked by a fired photographer seeking to hurt their brand.

Initially [in 2011] we started out with the tagline ‘a gay club for homos’, but now it’s ‘a gay club for everyone’,” she said. We’ve changed, and our crowd has changed. It’s a whole new Poof Doof now than it was years ago. It’s for the entire community.

We would like to apologise. We made a mistake. We would like to thank everyone for their meaningful comments and messages. We are continuously inspired by our fabulous community. Truly, thank you for sharing and we see this as a fantastic opportunity to learn. For everyone who has ever felt discrimination in any capacity, we all know that feeling. If you have ever felt discrimination in our space, that’s not good enough and we are taking full responsibility to fix it.

In the post, the bar promised to write and publicly post its new set of photographer guidelines. They’ve also created a public feedback survey asking how they can better serve the community.

“We are committed to making an incredible space for everyone and we need to listen to our community in order to do that,” the bar management wrote.

The bar’s current gallery of images on Facebook include both women and men of color as well as drag queens, though most of the men are slender or muscular.