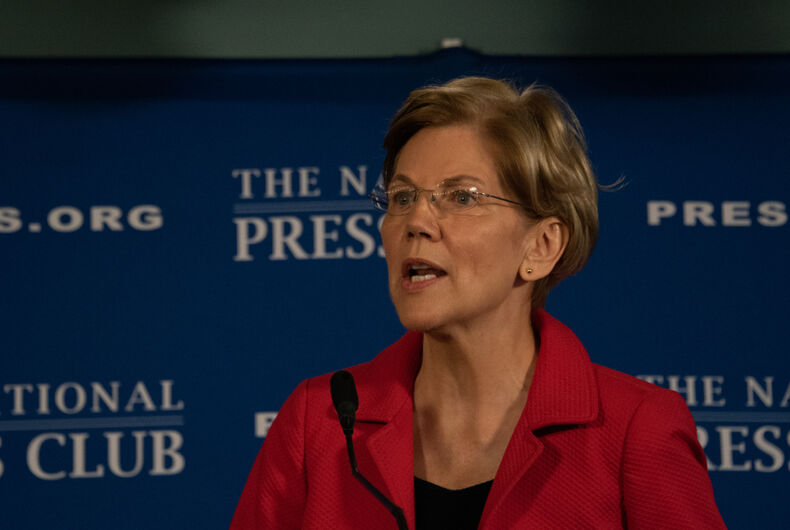 That year, inmate Michelle Kosilek sued the Massachusetts prison system for access to genital reassignment surgery. During the trial, Warren was running against Scott Brown, the Republican incumbent for what is now her Senate seat.

Speaking at the time on Kosilek’s case, Warren said, “I have to say, I don’t think it’s a good use of taxpayer dollars.”

Two years later, an appeals court ruled against Kosilek, but not before the inmate was able to speak out on her own behalf, saying that she found Warren’s comment “disheartening.”

“I would say that it was disheartening to me—and that is the kindest word I can think of — that a sitting United States Senator could be so misinformed about the right to prison medical care as established by the Supreme Court decades ago,” said Kosilek in an interview published in Boston Spirit.

“You don’t lose your right to humanity and dignity when you go to prison,” added Kosilek. “We don’t go to prison for punishment. We come to prison as punishment. This is what a lot of people, including our elected officials, don’t understand.”

Warren did not reply to the discussion until now, and has had a strong record on LGBTQ issues. She pushed for transgender-inclusion in the Employment Non-Discrimination Act (ENDA) in its 2013 version, and is a co-sponsor of the Equality Act.

Warren has also spoken out against Donald Trump’s transgender military ban, and other anti-transgender moves from the administration — but that one black mark has remained on her record.

“Senator Warren supports access to medically necessary services, including transition-related surgeries,” said Warren in response to an inquiry by Think Progress. “This includes procedures taking place at the VA, in the military, or at correctional facilities.”

It will remain to be seen if Warren’s move will affect her campaign going forward, but as the issue of transgender rights has taken to the forefront of the “culture wars” in the wake of the Supreme Court marriage equality win, it would stand to reason that Warren would choose to re-address the issue.

Warren is heading into the 2020 presidential race as a frontrunner in an otherwise crowded field, including possible contender Kamala Harris.

Harris is likely to face a similar issue. As California Attorney General, she asked the courts to disallow another inmate surgical care.

In that case, Harris fought against the care of Michelle-Lael Norsworthy, saying, “But the Constitution ‘does not guarantee to a prisoner the treatment of his choice.’ The Eighth Amendment requires that an inmate be afforded ‘reasonable measures to meet a substantial risk of serious harm to her,’ not that she be given the specific care she demands. The ‘essential test is one of medical necessity and not one simply of desirability.'”

Harris, who also has an otherwise solid history on LGBTQ issues, has not followed Warren’s lead and spoken to any change in her opinion.

Norsworthy has since been paroled and is seeking her care privately. Kosilek’s case is still working its way through the appeals process all these years later.