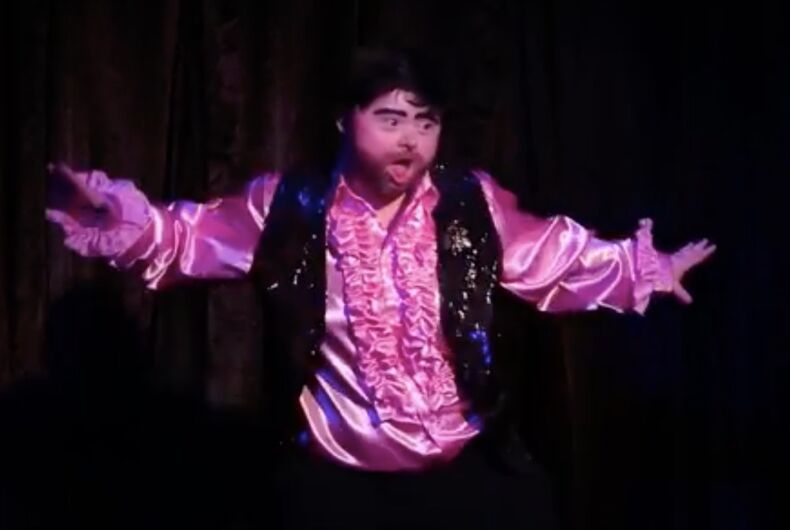 A British drag show called Drag Syndrome is highlighting drag queens and kings who have Down’s Syndrome, a genetic condition which can cause physical growth delays, intellectual disabilities and characteristic facial features.

Drag Syndrome held its opening show last year in an East London LGBTQ venue. It featured six performers with Down’s and quickly sold out. Four more performers have since joined the troupe. They’ve performed in Norway and are currently planning a world tour.

Photographer Damien Frost recently posted beautiful pics of some of the performers online.

The show’s lead organizer choreographer Daniel Vais created the show to “encourage arts organizations and performance troupes to ‘open up’ to [including] people with ‘learning disabilities,’” reports Broadly.

Here’s a video of a recent news feature about Drag Syndrome:

Vais says it takes some extra planning and resources to work with performers who have Down’s Syndrome. His performers sometimes get quickly exhausted or need trained assistants who can help care for them.

“[Vais is] adamant that Drag Syndrome isn’t a charitable project: This is drag it its purest form,” Broadly writes.

“The starting point is the art,” Vais told Broadly. “People see that actually, disability can be rock’n’roll and avant-garde and then they’re accepting it.”

Here’s a video of Justin Bond performing at a November 2018 Drag Syndrome show: