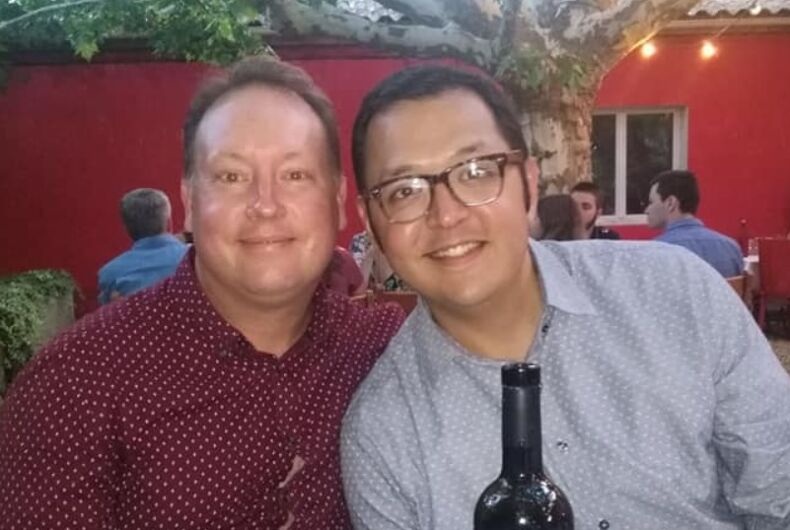 A wedding venue that rejected a gay couple citing a “vision… from God” has been removed from a wedding planning website for discrimination.

Aaron Lucero and Jeffrey Cannon have been together for three years and got engaged last summer. They set up a joint profile on “The Knot,” a popular wedding planning website that connects couples with vendors.

Lucero said that he set up appointments with several venues in the Dallas area and visited a few of them this past Saturday, January 19.

As the couple was going home, Cannon got an email from Lyle Wise, owner of The Venue at Waterstone, their first choice.

The email explained that they could not have their wedding at The Venue at Waterstone because of a “vision… from God.”

“The design for marriage that we hold to is based upon the design He set forth which is a representation of the bride of Christ joined to the groom,” Wise said in the email.

“Given His plan and design for marriage, we dare not veer from His instruction lest we be guilty of altering what He has set forth.”

Here’s the response from The Venue at Waterstone who denied us yesterday. pic.twitter.com/ugDqTgb14Q

Cannon responded for the couple by explaining their Christian upbringing and the homophobia they faced from their religion.

“Our prayer is that God will one day open your hearts as well so that you will be able to welcome all of His children into your beautiful venue,” he wrote.

Here’s my fiancé’s response to the venue. pic.twitter.com/eNDMwThHuu

The Knot, though, has a policy against discrimination that includes sexual orientation.

“When we learn that a vendor has violated these terms of service, we will remove the vendor’s storefront and refund his or her money,” the website’s CEO wrote in an Instagram post last year. “We love our couples, and all of our couples deserve a marketplace free of unfair prejudice.”

Out magazine confirmed with The Knot that The Venue at Waterstone was removed from the website for violating the Terms of Service.

Lucero said that he appreciates what The Knot did, and he hopes that they’ll take a more pro-active approach to discrimination in the future.

For example, vendors can get a badge on the site to show that they’re LGBTQ-friendly, but there’s no way to search for that badge.

After being rejected by The Venue at Waterstone, the couple decided to come out to several of the other venues they had appointments with, to save themselves some hassle and humiliation.

They had three more appointments, and two were canceled after they came out.

“It’s easy to think that all wedding vendors are open to work with LGBTQ+ couples — it’s 2019 after all,” said Brittny Drye, editor-in-chief of Love Inc. Magazine.

“And while most are, I still receive responses from many who are not, even in progressive cities like New York and San Francisco. Enough for me to know that we still have a long way to go.”