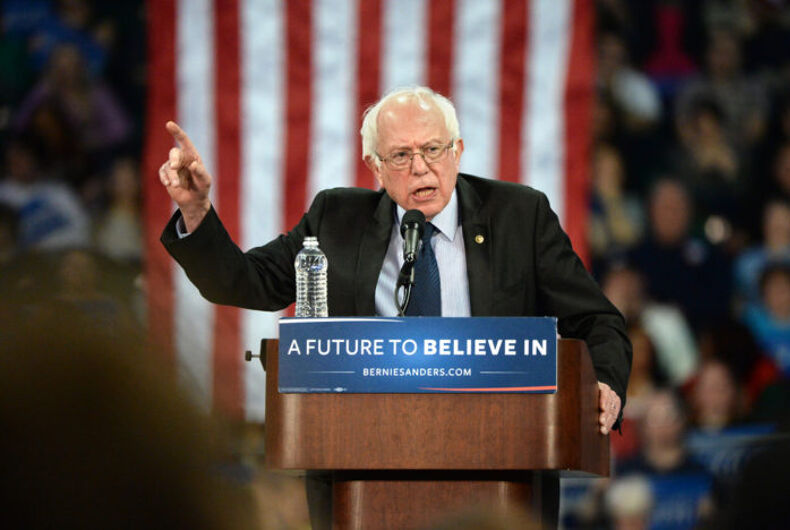 Women involved with Bernie Sanders’s 2016 campaign have started raising the issues of sexism and sexual harassment as he prepares for a possible 2020 run.

On Sunday, a letter signed by over two dozen women and men who worked for the 2016 campaign was leaked by Politico. The letter asked for a meeting with Sanders and his senior staff to address what they called “sexual violence and harassment” on the campaign trail.

“In recent weeks there has been an ongoing conversation on social media, in texts, and in person, about the untenable and dangerous dynamic that developed during the campaign,” the letter states.

It goes on to request “a ‘gold-standard’ harassment policy.”

Related: Bernie Sanders: I may run again in 2020

Regil asked to touch her hair, and then proceeded to touch it in a “sexual way.”

When Di Lauro reported the incident to her superior, Bill Velazquez, he allegedly laughed and responded, “I bet you would have liked it if he were younger.”

Both Regil and Velazquez deny the accusations.

Masha Mendieta, who was also on the Latino outreach team, said that she was present when Di Lauro talked to Velazquez and confirmed Di Lauro’s story.

Mendieta also complained about sleeping arrangements on the campaign trail when she was told to share a hotel room with three men she didn’t know.

“I was shaking with fear. Literally, I remember thinking to myself, ‘What am I going to do?’”

Director of operations for the 2016 campaign in Texas and New York Samantha Davis said that she said “no” when a supervisor invited her to his hotel room, which resulted in her being “marginalized.”

“I did experience sexual harassment during the campaign, and there was no one who would or could help,” she told the New York Times.

This past December, one of his delegates emailed him to say that he couldn’t run again without addressing sexism on the campaign trail.

“There was an entire wave of rotten sexual harassment that seemingly was never dealt with,” the delegate wrote.

Several staffers with access to salary records also noticed that female staffers were being paid “thousands of dollars less than their male counterparts,” according to the New York Times.

2016 campaign manager Jeff Weaver wrote an email that said that “anybody who committed harassment on the campaign would not be asked back.”

“Was [the campaign] too male? Yes. Was it too white? Yes. Would this be a priority to remedy on any future campaign? Definitely, and we share deeply in the urgency for all of us to make change. In 2016, as the size of our campaign exploded, we made efforts to make it a positive experience for people. That there was a failure pains me very much.”

This male model was harassed relentlessly in high school. Now his former bully is apologizing.