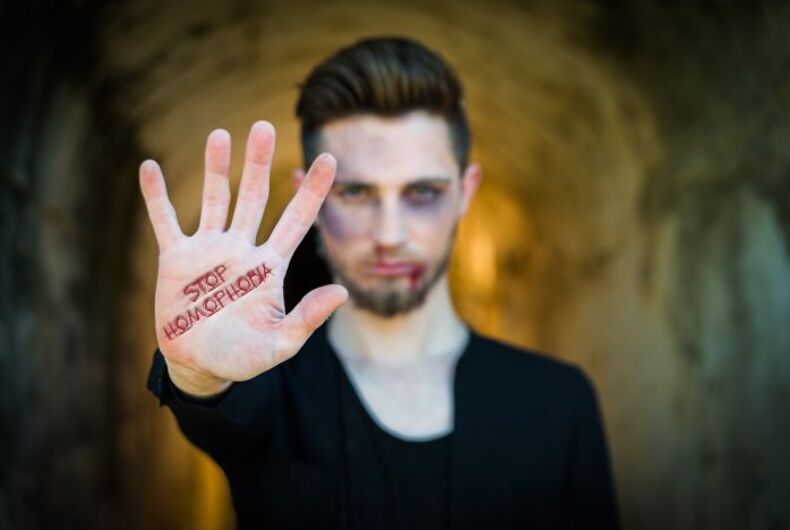 Five people attacked a man who was standing outside a gay bar in Philadelphia this weekend.

Police say that late Sunday night four men and a woman got out of a car and attacked a 50-year-old customer at the Toasted Walnut, a bar in Philadelphia’s Gayborhood.

“All of a sudden a car full of guys decided to jump out and attack one of the patrons here right in front,” said Josh Schonewolf, a bartender who witnessed the attack.

“They were definitely calling him some gay slurs as they were beating him up,” Schonewolf added.

Witnesses told police that other patrons tried to stop the attack.

“The (general manager) happened to be outside and he was also punched in the face,” said Schonewolf.

The attackers had fled the scene by the time police showed up.

The victim was taken to the hospital and treated for a head injury.

“I’m from Philly – it is always going to be the Gayborhood,” Schonewolf said. “And if this is happening at 13th and Walnut I don’t know where we’re supposed to feel safe.”

Philadelphia Police said that they cannot determine whether it was a hate crime, that the decision to add hate crime charges will be up to the district attorney after the police investigation is complete.

ABC 6 reports that people on social media said a similar attack occurred the night before in the area.

And in 2014, a several teens attacked a gay couple in Philadelphia in a brutal attack that made national headlines.

Three of the attackers faced criminal charges. Two accepted a plea deal that kept them out of jail, but the other went to trial and was sentenced to five months in jail.