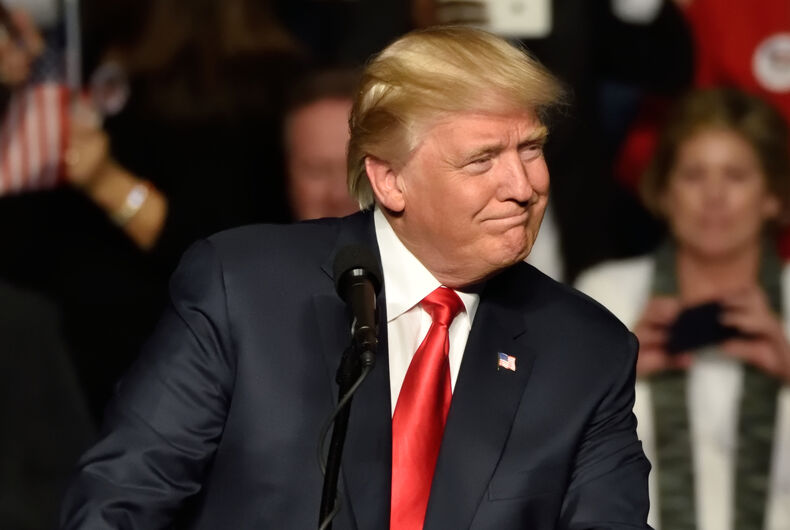 Once again, the Trump Administration has refused to protect LGBTQ working people from discrimination; this time in its newly signed NAFTA 2.0. Thanks to pressure from Canada’s trade representative, new language was negotiated into the deal that would protect workers from discrimination on the basis of sexual orientation and gender identity.

However, after a major push from the Administration and Republicans in Congress, the LGBTQ language has been amended with a footnote limiting protections to federal workers. It specifically states that, “no additional action is required on the part of the United States, including amendments to Title VII of the Civil Rights Act of 1964.”

This is just another example of how the Trump Administration is advancing the status quo when it comes to labor rights in our trade deals — words on paper that can’t be and won’t be enforced.

We all know that employment discrimination is a serious ongoing problem for LGBTQ working people that likely contributes to the higher poverty levels seen in our community. More than half of LGBTQ workers hide their sexual orientation or gender identity on the job.

Nearly a quarter of LGBTQ working people report experiencing discrimination on the job, whether that be in pay, promotions, or in getting the job in the first place. And these numbers skew higher for certain segments of the LGBTQ community. If you are trans or gender non-conforming, a queer person of color, or an LGBTQ immigrant, you’re likely experiencing multiple levels of discrimination.

There is no federal law that protects LGBTQ working people from discrimination. In fact, there are only a handful of state laws that offer these protections. The majority of LGBTQ people in the nation live in a state where there is no law that prevents discrimination on the basis of sexual orientation or gender identity.

The courts are still deciding if sexual orientation and gender identity discrimination are forms of sex discrimination and the current Supreme Court makeup doesn’t bode well for the multitude of cases in the pipeline. We are now seeing in real time how much damage an LGBTQ-hostile administration can inflict upon our community.

Trump is promoting this deal as a boon for American workers, but in reality it’s just more of the same. By refusing to take a much-needed step to protect LGBTQ working people, Trump proves yet again his penchant for talking out of both sides of his mouth when it comes to the LGBTQ community.

The purpose of our trade policy should be to create better jobs, strengthen communities, lower poverty, and build a stronger economy for all of us. Employment discrimination is a barrier toward equality of opportunity, it weakens communities, and it increases poverty.

LGBTQ working people have sought workplace protections for nearly 40 years in the United States, most recently through the Equality Act and previously through the Employment Non-Discrimination Act (ENDA) and other proposals.

Pride at Work recently sent a letter to Ambassador Lighthizer, the United States Trade Representative, urging him to maintain the language in the final agreement – advice he obviously did not heed. NAFTA 2.0 could have been a first step toward passing the Equality Act, but the Administration has ensured that LGBTQ working people won’t find those protections today.

Nonetheless, Canada has now set a standard for trade agreements to include LGBTQ protections and we will continue to push for these enforceable protections in future trade deals.

And with their new majority in the House, Democrats have pledged to make the Equality Act a priority in the new Congress. A footnote in a trade agreement neither erases the urgent need for better LGBTQ protections nor prevents the legislature from doing so no matter how much this President and his Administration wish otherwise.