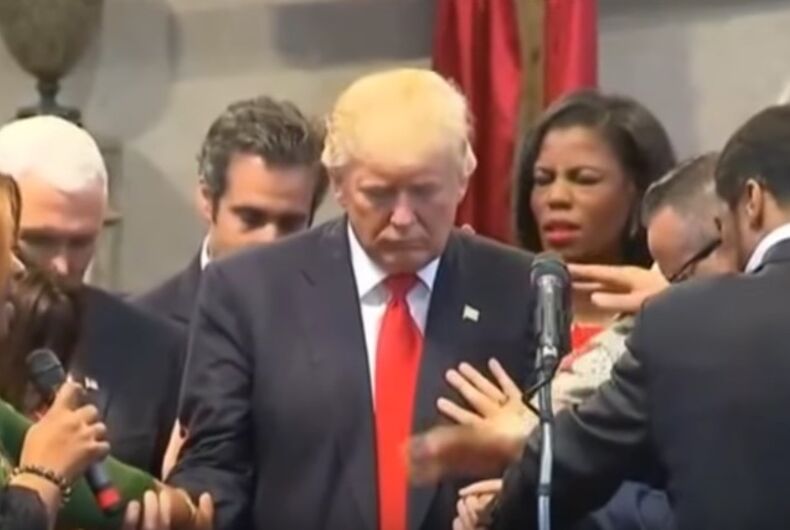 President Trump allegedly disguised a Christian “prophet” as a janitor and instructed him to anoint every door with olive oil in a bid to ward off demons according to an explosive new report.

“Apostle of Joy” Georgian Banov told the story at an evangelical gathering shortly before the midterm elections. Banov, who grew up in Eastern Europe, claimed that his friend and fellow “prophetic” leader Bill Johnson performed the ritual.

Johnson runs the Bethel School for Supernatural Ministry. Banov and his wife run the East Coast version of Johnson’s “ministry.”

“One of my friends, Bill Johnson’s friend, is one of the prophets near to the White House, and Bill said that recently Trump asked him, ‘hey, you got some of that oil stuff…?’ ‘What oil?’ ‘You know, the stuff that you guys put on things.’,” Banov told the audience.

Related: Priest claims people who use ‘they/them’ pronouns are possessed by demons

“And he goes, ‘no, I haven’t got it.’ ‘All right, will olive oil do OK for you?’ And gets from the kitchen some olive oil. ‘Whatever you gotta do, but go now and anoint every door in the White House. Anoint every door.’,” he said.

“And he says, they dressed him like a janitor so people don’t freak out—the staff. Not all the staff knows about all that stuff, you know?”

Earlier this year, a different pastor claimed Melania refused to move into the White House until it was exorcised to remove the “demonic taint” of the Obama administration.

This trans heartthrob is paving the way for bodybuilders