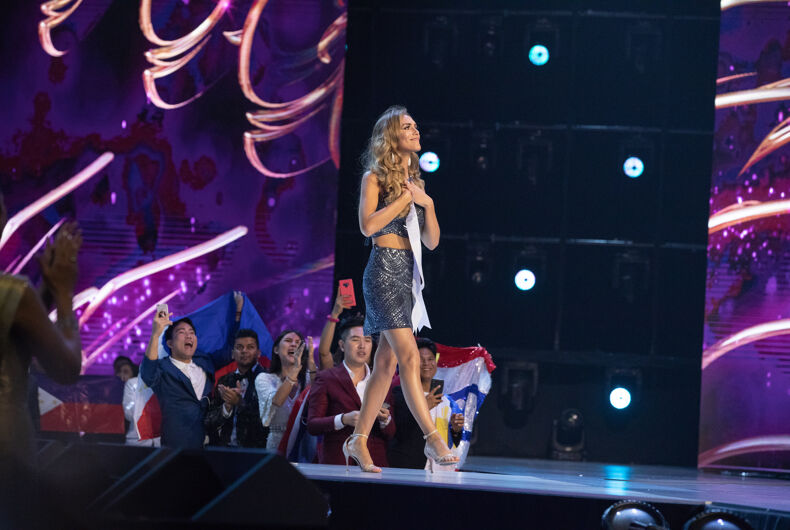 Miss Spain, Angela Ponce, walked across the stage of the IMPACT Arena in Bangkok, Thailand this week with history ahead of her but not necessarily on her mind.

The beauty queen became the first trans woman to make it to the main pageant in the Miss Universe Competition. She competed against women from 94 other countries and territories.

Miss Universe, formerly owned by President Trump, didn’t allow transgender competitors until recently. The 66-year ban officially ended in 2012, but no one ever made it through to the final competition until Ponce.

The 27-year-old beat out 22 others for the title of Miss Spain.

“I’m very excited to participate in Miss Universe. I feel like I am living a unique experience,” Ponce told LGBTQ Nation before the competition started. “I’m happy to be representing my country.”

“I hope people think that any dream is possible, when they see me in the competition,” added Ponce. “It is possible to live our dreams.”

Unfortunately for Ponce, this year, she failed to make the top 20. Miss Spain was honored with a solo walk, where she removed her sash and was given a much deserved standing ovation from the audience.

She may not have won the big prize, but Ponce definitely won a special place in the hearts of many who are fighting for the inclusion of trans and non-binary people in society.

I can't help but think about all that #JennaTalackova went through in 2012 to make this moment possible tonight for #MissUniverse contestant #MissSpain #AngelaPonce. Thank U Jenna and everyone who has come before us who have given us permission to dream. Congratulations Angela!